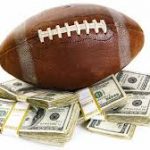 Most of us were surprised to hear the NFL Red Zone commentator announce that we had just passed the half way point in the 2019-2020 NFL pro football season.  Especially where the climate is still warm in places like Florida and California, it surely doesn’t seem like we should be half way through with the NFL already; it’s not even cold yet!

As more people than ever are wagering on sporting events one way or the other, good old American football, both college and pro, remains as the bookies ‘high season’, year after year. Now with the pending legalization of wagering on sports in various states nearing passage, availability to wagering options abound at casinos and racetracks across the country.

But, lots of bettors do not want to go out to a casino and stand in line to place a wager and then stand in line to collect their winnings then stop by and have a chat with the guy from the IRS at a nearby desk.

So, savvy bettors are doing what they have always done, place their wagers with a dependable local guy and enjoy the games at home or at their neighborhood sports bar. No sending money offshore. No reports to fill out.

Several things about the NFL season were predictable. Tom Brady and New England would come out as consummate professionals and once again dominate the competition.  The Patriots went 8-0 until running into the Ravens at Baltimore’s M&T Bank Stadium as 3 point favorites.  The Baltimore squad took over in the second half putting up 20 of their 37 points and holding the mighty Pats to just 20 points all game.

The Kansas City Chiefs, with second year QB sensation Patrick Mahomes, were given favored status for much of the off season and have pretty much lived up to the hype. However, after Mahomes went down with a knee injury and Matt Moore had to come in and pick up the slack, the Chiefs went from favorites to dogs last week and were listed as +5.5 underdogs for their match-up with the Minnesota Vikings at home at Arrowhead Stadium.

But stand-in QB Matt Moore proved to be more than adequate for the task and finished the game with 275 yards with one touchdown and zero picks!   The Viking’s Kirk Cousins threw for three touchdowns in the losing effort.

In yet another NFL ‘fantastic finish’, the game was finally decided on a last second 44 yard field goal by kicker Harrison Butker, which broke the tie and won the contest for the Chiefs, even without Patrick Mahomes at the helm.

Back-up quarterbacks were much in evidence last Sunday as Gardner Minshew started for the Jaguars in London against the Texans and the venerable Ryan Fitzpatrick led the hapless Miami Dolphins to their first victory of the season.

The Colts and Steelers game featured two back-up quarterbacks as well as Brian Hoyer started for Indianapolis and Mason Rudolph was under center for Pittsburgh replacing the injured Ben Roethlisberger.  Once again the game came down to a last minute field goal attempt but this time the kick went wide left by veteran Adam Vinatieri for the Colts, leaving the final score of 26-24, Steelers win.

In a barn burner out on the west coast, it took Russell Wilson throwing 5 touchdown passes and an all out effort by the Seattle Seahawks to defeat the stubborn Tampa Bay Buccaneers in overtime and putting up a total of 74 points in all; exceeding the over and under prediction by 23 points.

But the big surprise of the day was the 3-5 Los Angeles Chargers holding Aaron Rodgers and the 7-1 Green Bay Packers scoreless in the first half and eventually winning the game, for which they were tagged as 4 point dogs, by 15 points and defeating the Packers 26-11 in Carson, California.

Football season can also become a taxing time of the year for the local bookie who is still trying to do it all himself, or, has contracted with a second rate pay per head service to represent their business to their clients. If you feel that an upgrade is advisable, check out the established PPH companies first.

Host PPH has been in the business for almost 20 years working exclusively with ‘local guy’ bookmakers like you.  Host provides first class pay per head service to hundreds of bookies and tens of thousands of daily players every day of the week, 24/7 and has the infrastructure and experienced staff to insure that all aspects of the wagering and accounting experience go smoothly and effortlessly at all times.

Make the call today to 866 601 4678 and see just what a quality pay per head service like Host PPH can make in your business, and in your life.