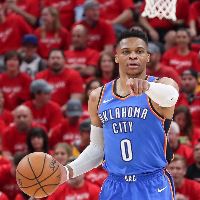 The Oklahoma City Thunder are a 3.5 favorite against the Utah Jazz for Game 5 of their series at the “Thunderdome” in Oklahoma. The total is 207 with the over at -115 and the under at -105.

Interestingly there was no suspension for the Thunder’s Russell Westbrook despite his altercation with Utah center Rudy Gobert back in game 4 of the series.

The line is quite puzzling considering that the Jazz has stormed back winning three games in a row after falling in the first game of the series. The Jazz can close out the series with a win here on the road like they did in game 2 of the series.

The fact that the Jazz won at Chesapeake Energy Arena to tie the series at 1 was quite surprising considering that Utah has lost 15 of it’s last trips to that venue.

Although Oklahoma will fight for its life at home and try to survive to play game 6 in Utah it wouldn’t be surprising to see them losing here as the Jazz have so far proven to be the most cohesive teams in these series.

Westbrook and small forward Paul George are struggling in these playoffs and have failed to perform consistently for Oklahoma, which explains why the Jazz’s team basketball is prevailing over the Thunder’s individual stars.

Despite the Jazz’s recent domination watch out for a breakthrough game for Westbrook as he is due for one. He could have it in this game as the Thunder look to stave off elimination.

The two games in Utah were astounding as the Jazz simply smashed the Thunder, so even though Oklahoma has the advantage in almost every statistical category, the Jazz could win this one on the road if they continue to put their team game first.