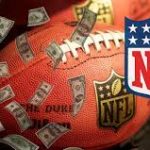 Finally, after a long cold summer, Thursday Night Football once again appeared on our screens when the National Football League Hall of Fame game was played at Tom Benson Stadium in Canton, Ohio as part of the annual NFL HOF induction ceremony.

As the game fell on a Thursday night, we got the real Chris Collingsworth and the real Al Michaels to call the game which somehow added a degree of authenticity to the event.

The 100th NFL Season opening contest between the Denver Broncos and the Atlanta Falcons saw ticket prices starting at around $100 each. The price of football is going up this year!

Unlike preseason games in the past, this one drew some pretty heavy wagers, mostly placed by professional bettors and ‘wiseguys’. The regular bettors don’t usually wade into preseason NFL games, but, if the guys who pay close attention see an out of whack line up, you can bet that they will jump on it.

As a matter of fact, at the big sports books in Las Vegas, more money was wagered on the opening preseason NFL game this year than went down on some pretty heavy baseball games going on at the same time. Bookies and bettors alike were surely glad to see good ole American style Football back on the field once again. Even the Astros at Cleveland didn’t draw as much action.

Director of trading at the Mirage in Las Vegas stated that for the first time he was receiving requests for six figures wagering limits from some VIP casino guests on NFL preseason games ranging up to $20,000 & $30,000.

But William Hill’s Nick Bogdanovich still does not think too much of preseason football. “The masses don’t normally get fully involved with the exhibition games. The average Jose doesn’t even know who is playing. It’s glorified tryouts’.

What we are seeing already is not so much that the general public is wagering on preseason NFL games, but the smart money often is.  By smart money we mean the pros who make a living studying and wagering on sporting events and have every reason to think that they will come out winners on these rather obvious early contests. Professional bettors probably account for between 50-70% of the wagers placed on preseason sports.

John Murray of the Westgate SuperBook stated, “The handle is pretty sharp-concentrated on straight bets on the NFL preseason”.  So much was wagered on the NFL Hall of Fame game that the Broncos went from an opening line as one point underdogs to being a 2.5 favorite before kickoff time.

As it turned out, it was not until a tipped pass resulting in a Denver touchdown with 1:26 to play in the game that the Broncos finally covered that spread and won the game 14-10. So the first contest was an interesting cliff hanger right up until the end.  Not a bad way to start NFL season number 100!