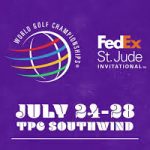 After only 3 days of travel and rest since the closing round of the British Open at Royal Portrush in Northern Ireland, the best golfers on the planet will be teeing off just outside of Memphis, Tennessee for the WGC-FedEx St. Jude Invitational at TPC Southwind.

Notably absent from the field will be Tiger Woods who looked exhausted at ‘The Open’ and publicly announced that he needed to rest and relax. Rickie Fowler will also not participate this week. However, most everyone else on the ‘A List’ of professional golf will be there in competition.

Oddly enough, Shane Lowry, who just took home $1,935,000, and a lot of pride and joy, from winning the British Open, is not one of the favorites to repeat at TPC Southwind. As a matter of fact, Mr. Lowry has withdrawn from the St. Jude Invitational to continue with his celebrations after winning ‘The Open’ and becoming a home town hero there in Ireland.  Good for you Shane, enjoy it!

Rory McIlroy, who crashed and burned badly at the Royal Portrush, his home course, is now listed as an 8-1 favorite at Southwind. Go figure. McIlroy was visibly shaken after missing the cut at ‘The Open’. Last year’s winner Dustin Johnson is listed at 6.5-1, the number one favorite, to repeat as champion at the St. Jude Invitational again this year.

Now, the St. Jude Invitational is not one of the 4 ‘majors’.  It is part of the WGC series, which stands for World Golf Championship and utilizes the Match Play format. Also, there will be no cut line at the end of the first 36 holes, or after the second day of the tournament. Everyone gets to finish the tourney.

While the purse of over ten million bucks is obviously one of the major enticements to play in the St. Jude, the event also counts high on OWGR and FedEx Cup points.  Elite competition is expected from this stellar field.

After a frustrating British Open, Brooks Koepka will have another shot at a big win assuming he does not get stuck behind anymore slow golfers as happened to him at the Royal Portrush.  Koepka has all the tools to crush this course and is also listed at 8-1, although his record in non-majors is not very impressive.

Jon Rahm played the first three days of the British Open as well as anyone on the course before getting blown away on Sunday and falling out of competition. He too is listed at a 12-1favorite to win at Memphis.

Two young American golfers who have been impressing everyone out on the links this season are Justin Thomas and Patrick Cantlay both of whom are given 16-1 odds to win the St. Jude Invitational.

Matt Kuchar lost his lead in the 2019 FedEx Points competition last week to Brooks Koepka after the British Open but ‘Kuch’ will be out there again at TPC Southwind at 25-1 along with Jordan Spieth, Webb Simpson and Hideki Matsuyama.

British golfer Tommy Fleetwood came in second at the Royal Portrush and earned himself a nice $1,120,000 prize.  Not bad for the runner up. Fleetwood will be there among the favorites at Memphis and is currently listed at 16-1 along with fellow Brit Justin Rose and young Xander Schauffele.

In a bit of a mix up from previous years, this will be the first year that the WGC event, which was at the Firestone Country Club in Akron, Ohio last year, will take place at TPC Soutwind in Memphis and also marks the first time that the St. Jude Invitational will be an official World Golf Championship event.