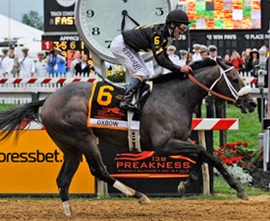 It was age before beauty at Pimlico on Saturday. Legendary thoroughbred trainer D. Wayne Lukas and veteran jockey Gary Stevens teamed up on a 15-1 long-shot named Oxbow to win the 138th running of the Preakness Stakes near Baltimore.

When Oxbow crossed the finish line ahead of the field, it marked the sixth Preakness victory for Lukas and his 15th Triple Crown win… that sets a new record in horse racing history. Oxbow led the field for the entire race start to finish.

So, there will be no Triple Crown winner this year. The winner of the Kentucky Derby, Orb was heavily favored to win the Preakness as well but suffered the fate of most thoroughbreds assigned to gate #1 and got bunched against the rail early on and could never quite catch up. Orb went off at 3 to 5 ended up finishing fourth… just out of the money. No horse has won the highly coveted Triple Crown since 1976 when Affirmed took home the Crown

At Pimlico on Saturday there was a 13 race card for the crowd of 117,203 on hand Saturday. The total handle for the day was $81,940,233. That number includes revenues from the InfieldFest which held concerts featuring six bands. Maryland Jockey Club president Tom Chuckas told reporters, “It was a fantastic day to cap what was a wonderful weekend of racing and entertainment.”

Oxbow now joins a historic list of six thoroughbreds that have won the Preakness under the supervision of D. Wayne Lukas. His predecessors were Charismatic in 1999, Timber Country in 1995, Tabasco Cat in 1994, Tank’s Prospect in 1985 and Codex way back in 1980.

Oxbow paid $32.80-$12-$6.80 to win-place & show. Coming in second was Itsmyluckyday ridden by John R. Velazquez and third place was taken by Mylute with Rosie Napravnik aboard. Orb was fourth followed by Goldencents, Departing, Will Take Charge, Govenor Charlie and Titletown Five.

Hall of Fame Jockey Gary Stevens told the press after the race, “We came in here with a lot of confidence. When I hit the half-mile pole, I told myself ‘Are you kidding me?’ ‘Is this happening?”

Stevens went on to say, “Wayne put me on my first Triple Crown winner. He called me up one day to say, “I’m going to have a colt for you. His name is Oxbow.”

Lukas has already confirmed that Oxbow will be ready and willing when Belmont time rolls-around.