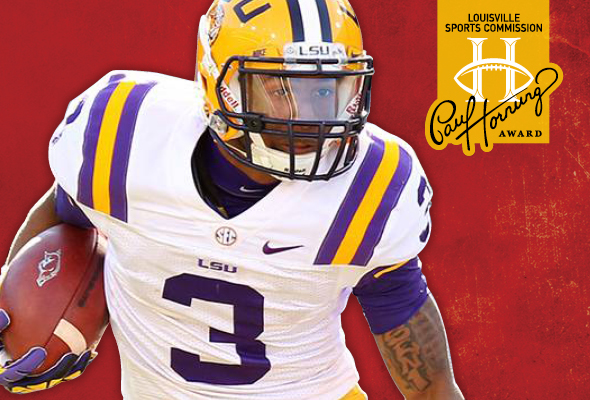 LSU was blessed with two of the top wide receivers in all of college football for the past couple of years but now both Tiger stars are turning pro. Jarvis Landry and Odell Beckham Jr. have both announced their entry into the 2014 NFL Draft. The move was anticipated by LSU fans and coaches alike and while sad to see them go, everyone connected with the LSU program surely wishes them both the best of luck in the pros.

What it comes down to is the money. While it would be nice to stay in the relative security of a college campus for another year and be a local hero, what the pro clubs are putting on the table for rookie players, seniors or not, is just too much to pass by.

Jarvis Landry finished the season with 77 catches racking up 1,193 receiving yards with 10 touchdowns. Landry and Beckham combined were responsible for over two third of the Tigers passing offense.

Odell Beckham had 59 receptions on the year for 1,152 yards and 8 touchdowns. Beckham was also the recipient of the coveted Paul Horning Award for 2013 which is presented to the ‘most versatile player college football’, quite an honor indeed considering the heavy competition this year.

Beckham talked about the award with the press, “It’s just an honor and a blessing to even be mentioned with the other guys who were up for the Horning Award. I am proud to accept the award and thank the committee for recognizing me. It means a lot to me personally because I have worked extremely hard, long before this season started.”

Paul Horning, the 1956 Heisman Trophy winner and one of the toughest guys to ever have played the game, said about Beckham, “I love the way Odell plays the game. He can run, catch, block and return kicks and plays with great determination. And he has my admiration for lining up on the scout team during the season to help his defense get better. That’s how I played the game, doing anything I could to help my team win.”

Both Landry and Beckham are currently undergoing a rigidly tough regime of preparation for the upcoming NFL combines in February including physical therapy, nutritional planning, interview preparation and media training as well as position specific coaching from the LSU staff. Both are expected to be gone by the end of the first day of the draft.