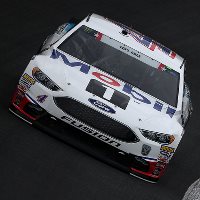 NASCAR heads to Pocono Raceway on Sunday for a 400-mile race at the Tricky Triangle. The green flag is scheduled to fly at 2 p.m. ET.

Defending track winner Kyle Busch, who has finished in the top 10 in his past three races at Pocono, also has top four top-10 finishes in his last six races there. He will look for a second-straight win in the Cup Series.

With 10 spots remaining in the Round of 16 and the playoffs approaching rapidly, drivers are hoping to secure a win to clinch their place in NASCAR’s postseason.

Denny Hamlin enters Sunday’s race inside the top 10 in points this season but has yet to secure a win in 2018. The No. 11 driver hasn’t finished higher than third this year but has four top-10 finishes in his last five races and has led in 10 of the 13 races.

Ryan Blaney, who’s been one of the top drivers in the sport this year, but he is winless. Perhaps there’s hope for him this week as he’s starting from the pole and enters Sunday’s race 11th in points.

Bubba Wallace also will be looking to secure a win on Sunday. His track record isn’t great, finishing 26th in his debut at the Tricky Triangle, but he is a much more seasoned driver this time around.

Another driver that has yet to secure their first career win is Erik Jones. He finished third in his Cup Series debut at the track last June and showed consistency early in the season, placing in the top 10 five times throughout the first 13 races. He enters Sunday’s race at 13th in the points and may just take home that elusive first checkered flag this weekend.