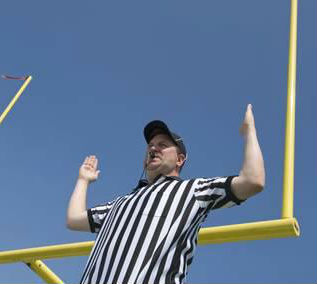 The NFL record for longest field-goal continues to stand at 63 yards.

Tom Dempsey originally set the mark in 1970, and it’s been equaled by only 3 others, most recently by David Akers of the San Francisco 49ers back in September.  In other words, the record has stood for 42 years.

The senior booted the 67-yard field goal to tie the game against Shadle Park on a Thursday night. Central Valley would go on to win 65-55 in overtime. After a clean snap and a hold at his own 43-yard line — yes, his own 43 — Rekhow stepped up and drove his boot right through ball, which went on through the uprights, setting the stage for an eventual overtime victory for Central Valley and a bright future for Austin!  In a film clip, the ref is show throwing up his arms in total surprise!

But as amazing as the kick is, it’s not even the longest at his level. The high school mark belongs to Dirk Borgognone, who kicked a 68-yarder while a student at Reno High School in 1985.  We wonder what ever happened to him.

Such long kicks are less frequent at the professional level because of where the ball would be placed should the attempt fail; that is, within the defenders own territory giving them excellent field position.

On a historical note, New Orleans Saints place kicker Tom Dempsey set the 63 yard field goal record in Tulane Stadium on November 8, 1970 against the Detroit Lions.  He kicked 4 field goals that day, the final and record breaker came with just two seconds left on the clock and gave the Saints a come from behind 19-17 victory over the Lions.  Dempsey was born with only half of his right foot and with no right hand. He was fitted with an artificial foot in childhood and used that foot, encased in a modified football shoe to kick his field goals and extra points.  Wow!