Anthony Davis Is Not Worthy Of MVP Discussion 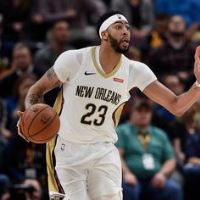 The career of New Orleans Pelicans power forward Anthony Davis has been filled with the promise of a player who can just about do it all.

Now, as the Pelicans have climbed up to fourth in the Western Conference and march towards a playoff run there’s been talk and debate among the league pundits of Davis emerging as a legitimate MVP award candidate.

But is he worthy of that consideration? His talents are undeniable, from posting up to shooting from long range to protecting the rim and even handling the ball he is widely regarded one of the future superstars of the NBA.

Davis is especially good at the high post, as he’s always a dribble or two away from the hoop and the threat of his jump shot is enough to get any defender out of position.

His quickness and explosion can leave defenders gasping for air as he rises up with his elbows above the rim for thundering dunks.

Same goes for the low post, where he can either blow by defenders with his back to the basket, or he can use his guard-like skills to shake and bake for a fadeaway jump shot.

As a roll man is hard to guard for opposing defenders as he can finish over the rim as well as anybody in the league or use those guard skills to create his own shot after pick and pop created an advantage.

Since he’s one of the league’s most mobile big bodies in the NBA he’s also among the league leaders in block shots every year as his physique allows him to swoop in and knock away shots at the rim.

Most impressive is that since teammate DeMarcus Cousins went down for the season his averages have gone up and been nothing short of spectacular (31 points, 12.7 rebounds, 2.1 assists and 3.0 blocks).

But despite this explosion and leading his team to a 13-9 record since Cousins went down, even his own coach Alvin Gentry has refused to consider Davis worthy of MVP discussion.

Although Davis massive production all across the box score is undeniable, his value to the team may not be as valuable as some pundits want to make people believe.  The Pelicans net rating since Cousin went down is -1.6 with Davis on the bench and +1.8 with him on the floor.

That minuscule difference in net rating is not worthy of the kind of impact that an NBA player has on his team. Davis’ numbers pale in comparison with Harden’s and the impact he has on the Rockets.

Unless he starts making a bigger difference when he’s on the floor, there should not be any discussion about Davis being worthy of the MVP award.

If his numbers improve and the Pelicans do make a deep playoff run then we will have more information to determine if he’s on his way to being a perennial MVP contender, or just a hugely talented player that puts up big numbers all across the board but can’t be relied upon to make a huge difference when he’s on the floor.