Astros Aim For 70th Win Of The Season Against Rays 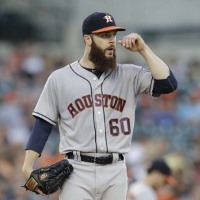 LHP Dallas Keuchel will start against the Tampa Bay Rays (55-53) tonight as the Houston Astros (69-37), the American League winningest team, will try to earn their 70th victory in Major League baseball this season.

Keuchel (9-0), will try to dominate the Rays bats, which in yesterday’s game connected 12 hits, including homers from first baseman Logan Morrison and shortstop Evan Longoria, as the Rays beat the Astros 6-4. Langoria also had a triple, a double and a hit in the game to become only the second player in Rays history to hit for the cycle.

Pruitt, who attended Houston University and will be pitching in front of friends and family, will try to help the Rays earn their 56th win of the season. The Rays are third in the A.L East, which is led by the Red Sox (59-49), while the Astros have a 15-game lead on the Mariners in the A.L West.

Meanwhile, in the National League the Los Angeles Dodgers (75-31), A.L West leaders and the winningest team in the majors, will try to with their 10th straight win and a second victory in their four- game series against the Atlanta Braves.

Last night the Dodgers defeated Atlanta 3-2 as they sent Japan’s Kenta Maeda (10-4) to the mound. Maeda dominated the Braves as he gave up two hits and one walk with six strikeouts over seven scoreless innings to lead the Dodgers to victory.

The loss was pinned on rookie RHP Lucas Sim (0-1) who was making his MLB debut with his hometown Braves. Dodgers closer Kenley Jansen, got his 28th save in 29 tries.