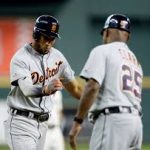 They were the longest odds ever offered on a major league baseball game in the past 15 years. Articles were written about it.  It was a major subject of conversation on sports talk shows the day of the game.  Little did they know.

But, hey, that’s baseball. Sports Books around the country were delighted to collect $550 from all those bettors that thought they had a sure thing. But they had not counted on what is being called the ‘greatest upset in baseball history’…well, gambling-wise anyway.  Surely serious students of the game can come up with bigger upsets, but they will find none involving so much money.

The motivating factor moving most bettors to wager on the Astros at -550 was that Justin Verlander was pitching.  He is an ace, one of the best. Bettors kept loading up on Houston all the way up until first pitch pushing the MGM Grand line all the way to -600 so that those few lucky bettors who actually put down their $100 on Detroit to beat Houston, took home a nice $600 win.

Actually, the Tigers only got two hits off of Verlander, but that turned out to be all they needed for the win.  Verlander had 11 strike outs and gave up only two hits in what would have been a dominant performance for the All Star left hander, except that his team failed to provide the necessary run support and Verlander ended up taking the loss.

After the game Astros manager A.J. Hinch told reporters about Verlander, “Just an incredible performance. Just not one that we could help him with.  We wasted a really good start by our starting pitcher”.  He didn’t sound in the least concerned about the -550.

After retiring the first 14 batters in a row, Verlander gave up two home runs to Ronny Rodriguez in the 5th and John Hicks in the 9th, the only two base runners allowed all evening, making the upset all the more improbable and amazing, especially since Hick’s homer didn’t come until the ninth inning.

A dejected Verlander told the press afterwards, “I don’t blame anybody but myself.  I could have done a better job executing pitches there in the ninth inning”.

The Astros’ Robinson Chirinos did manage to homer in the 7th inning off of Tyler Alexander’s first pitch, but it just was not enough.  The famous batting power of the Houston Astros, which carried them to a World Series victory over the Dodgers in 2017, did not materialize against the Detroit Tigers.

Just a couple of weeks ago the Astros were also listed at -460 road favorites against the Baltimore Orioles, they also managed to lose that one 8-7 in what was deemed a huge upset at the time, little did we know.

Las Vegas Sports Books had a good evening all round with the Mirage reporting winnings of ‘more than six figures’ on the game, partially stemming from the $55,000 they made on one bon vivant bettor who sought to pick up an easy dime while visiting the Mirage.

Savvy bettors can do well on baseball, just not on a regular basis.  The game has always been like that.  Like the “On Any Given Sunday” slogan used by the NFL, baseball is a game where the lowest team on the totem pole can beat the reigning world champs, on any given evening; as we all just saw.