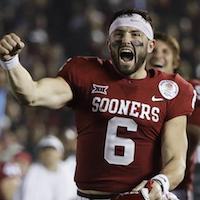 The NFL draft is rapidly approaching and one of the top talents at quarterback getting attention from NFL scouts is Oklahoma’s Baker Mayfield who had quite a productive career and an outstanding season for the Sooners as he won the Heisman trophy this year.

Mayfield has very good running skills and at times even looks like a running back when he’s rushing for yards.

Mayfield is not a run-first quarterback, but he won’t shy away from it and can do it if the play forces him to. He is the draft’s best improviser and is able to keep his eyes downfield even amidst pressure. He is not looking to run when he scrambles, he is looking to pass and his progressions don’t stop when the pocket breaks down.

He’s poised and even deadly when the pocket collapses around him and because of this, he will be a pain to cover and stop in the NFL.

Mayfield also thrives in structure and is great in the short and intermediate range when it comes to passing. Of this year’s quarterbacks class, he is arguably the most impressive with his accuracy.

Unlike players like Wyoming’s Josh Allen and USC’s Sam Darnold it was rare to see Mayfield missing a throw and knows how to put the ball exactly where it needs to be most of the time. He completed 70 percent of his passes, and that doesn’t include drops that could’ve been caught.

Mayfield made very few mistakes and was rarely intercepted as he amassed a 129-29 touchdown-interception ratio in three years at Oklahoma and was 43-6 this year. He also passed for 4,627 yards and rushed for 311 along with five scores.

Mayfield’s arm may not be elite caliber, but he does not have a weak arm. Especially inside the 20-yard-line the ball comes out with zip. He can go downfield with his accuracy and knows how to set up his players to make plays after the catch, something that he could replicate in the NFL.

Although his deep ball has some issues he could thrive in numerous NFL offenses because he is incredibly accurate, a dangerous improviser and also fares well within the structure of an offense. He is fantastic keeping his eyes downfield even when under pressure, makes very few mistakes and is a dual-threat as a runner.

Among Mayfield’s problems perhaps the most concerning is his tendency to hold for too long to the ball and as a result takes bad sacks. Also, although he thrives in the short to medium range, his long-range ball needs work, as he tends to sometimes underthrow his receivers.

Furthermore, since he operated almost exclusively from the shotgun formation, and will need a lot of work under center after the draft to adapt to the different NFL formations.

He is somewhat undersized for a quarterback but should be OK as several smaller size quarterbacks have proved they can thrive in the NFL. Bigger worries for whoever drafts him will be his tendencies to hold to the ball for too long and trying at times to do too much, just as his on-field antics and his off-field issues.

Despite all those issues, Mayfield is a first-round pick and perhaps the best quarterback of this year’s draft. If he were a bit taller he would be the consensus number-one quarterback. He’s very comparable to New Orleans Saints quarterback Drew Brees and as a result, he would be a good fit for that franchise as they could groom him as his replacement while Brees plays his last few seasons in the NFL.

Problem with that is that he probably won’t be available by the time the Saints draft unless they trade to get him and that could be very expensive for them. Expect him instead to land with teams such as the Denver Broncos, New York Jets or Arizona Cardinals.