Baltimore Sends Thanks To The City Of New Orleans 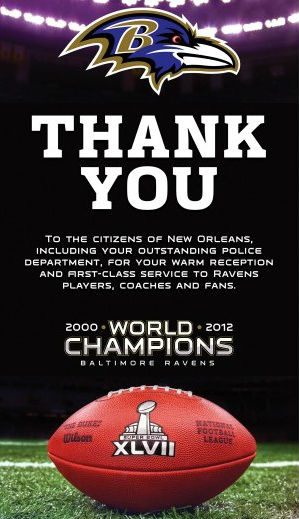 The Super Bowl XLVII Champion Baltimore Ravens have sent a pair of Hogs (or is that Hawgs) to the City of New Orleans in appreciation of the hospitality and kindness shown the team by the people and officials of the Big Easy during this year’s Super Bowl festivities. Actually they donated two brand new 2013 Harley Davidson FLHP Motorcycles to the New Orleans police department and the official statement from the Ravens was that the big bikes were being presented to the city in gratitude for “its hospitality, friendliness and service”.

Let’s face it, the Ravens are going to be tough to live with for some time in the future after beating the 49ers in Super Bowl XLVII in February.  They got a grand police escort everywhere they went while visiting Louisiana’s largest city so I suppose they figured that New Orleans could always use a couple of more Harleys in the stable.

Ravens owner Steve Bisciotti said that “We wanted to do something to show our appreciation for how well our team, our families and our fans were treated by everyone representing New Orleans. Every place we went, the good people of New Orleans treated us with kindness and tremendous service…. across the board.”

Ravens receiver Jacoby Jones, a native of New Orleans, presented the gift to the city.  Jacoby will be remembered for his 108 yard kickoff return for a touchdown to start the second half of the Super Bowl and set the tone for the upcoming Baltimore victory.

“I always talk to my teammates about Southern hospitality, and the fact that it was on display enough during our Super Bowl week and to have the Ravens donate something to the great people of New Orleans is special,” Jones said. “Winning the world championship in my hometown and then being able to do something to help the people who protect it is a great feeling.”

The local New Orleans newspaper, the Times-Picayune, featured a large add submitted by the Ravens head office sending their thanks to New Orleans as well.  Knowing the average New Orleans resident, a Saints fan, their response to the gifts would be something like, Oh yea! Hey, Bisciotti, where the hell is my Harley?”

Not to worry, the Ravens don’t have to play this Saints during the regular season next year, so, the two towns can remain at peace until the two teams clash once again.