Baseball News Of The Week 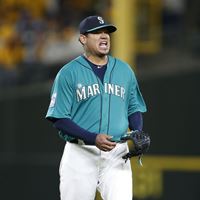 The Seattle Mariners will not be able to have ace Felix Hernandez or rookie outfielder Mitch Haniger as they were sent to the 10-day disabled list with the intention of bolstering the roster for upcoming matches.

The stellar righty will miss several games as he recovers from inflammation in his right shoulder, while Outfielder Ben Gamel will see action in place of Mitch Haniger.

The struggling Mariners called pitchers Chase De Jong, Dillon Overton and Casey Fien from the minor leagues and they will send pitchers Evan Marshall and Chris Heston back to the Minor Leagues.

Hernandez was on the mound for just two innings against the Detroit Tigers, before suffering from a “dead arm.” He returned to Seattle to undergo medical examinations and the results showed an inflammation to his right shoulder.

The “King” has a 2-2 record with a 4.73 ERA in five starts, and he allowed four runs, six hits and two walks on Tuesday night against the Tigers.

Jackie Robinson, on April 15, 1947, cracked down on racism by breaking the color barrier in the majors. Now, 70 years later, Gift Ngoepe, has become the first African-born player to play in the majors.  The South African made his debut on Wednesday night with the Pittsburgh Pirates, in the 7-5 victory over the Chicago Cubs at PNC Park.

To make his debut something to remember Ngoepe hit a single in the bottom of the fourth inning off pitcher Jon Lester. The South African, who ended the game with one hit and one walk in two at bats, played at second base.

Ngoepe became the second player from a non-traditional baseball nation to see action with the Pirates this season. On Monday’s 14-3 loss to the Cubs, pitcher Dovydas Neverauskas, born in Vilnius, Lithuania, became the first player from that country to play in the majors. The Lithuanian who left the field with an ERA of 4.50, allowed two hits, one run and struck a player in in two innings of action.