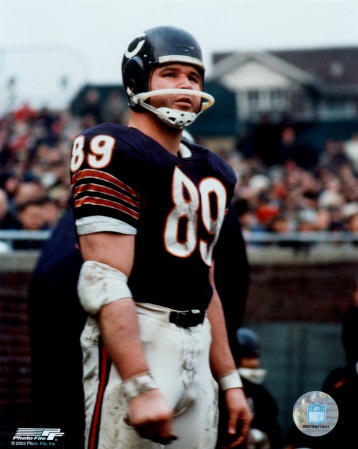 If you were thinking about putting up a line on the odds on former Chicago football greats Brian Urlacher, Mike Singletary, Dan Hampton or Richard Dent having their jerseys retired by the Bear’s organization… take them back down again. It’s not going to happen.

George McCaskey, the chairman of the Chicago Bears, announced that the team will be retiring the jersey of former Bear great tight end Mike Ditka. Ditka dominated and re-defined the position during his tenure with Chicago from 1961-1966.  He is one of the few Chicago players to also serve as head coach of the Bears.

So, number 89 will be hung in Halas Hall to honor Mike Ditka, but, according to McCaskey, number 89 will be the last jersey so honored by the Bears organization. Of course, Mike Ditka deserves the honor.  He is one of the most iconic players to ever wear a Bears uniform. Ditka is the 14th Bear to have his number retired.

However, McCaskey’s presentation probably left a little to be desired to those few who thought that they too might have a shot at having their jersey retired as well.

The Bear’s chairman also announced at the same time that this was to be the last jersey that the Bears were ever going to retire to a place of honor.

McCaskey put it this way, “If there is going to be a last one, there is no more appropriate one that 89.”  That’s all well and good but what about the other former Bears, most of whom are already in the NFL Hall of Fame?  Tuff luck?

After the disgraceful way in which the Bears let go of Brian Urlacher, this move comes as no big surprise. The Bears organization seems to be saying goodbye to all sentimentality in their decision making process.  Bears fans can only hope that this will translate into more and more victories for a football team that has struggled in recent years.

One of the guys whose number probably should have been retired was that of defensive lineman Dan Hampton who told the press after the announcement, “It’s simple math. This is a franchise with so many great players.  If everybody’s number got retired, it would diminish the honor in a way.  I understand.  The trap of it all is that if you played for the Bears, you’re one of many.  If you played in Tampa, what is there, a handful of guys?”

In any case, congratulations to Mike Ditka on the great honor.