Bo Pelini Is For Real 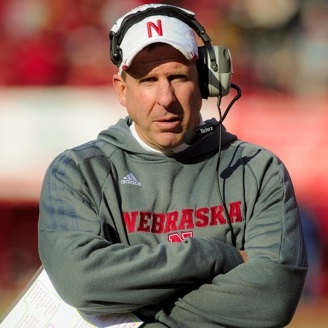 There was a great story on the news last week about Nebraska head football coach Bo Pelini on a recruiting trip to the home of four-star offensive lineman Tanner Farmer in Highland, Illinois. Farmer was a top rated recruit listed as the #82 overall prospect and the Cornhuskers set their sights on him for next season.

Now Bo Pelini is not a little guy and he is obviously still in pretty good shape. But he might have been pushing his luck just a bit when he challenged Tanner Farmer to a wrestling match right there in his own home. Did I mention that Tanner stands 6’4” tall and weighs in at 315 pounds?

Pelini must have been feeling his oats that day because he challenged Farmer, “I bet you can’t take me down.” Did I mention that Farmer was also an Illinois State Champion heavyweight wrestler? What the hell was Bo thinking?

Farmer’s Dad Brian told him at once, “Go on boy. If he wants to go, go.”  And then Pelini pushed the point, “You scared to take me down?”

All at once the Nebraska head coach found himself up in the air locked in a bear hug with him future lineman. The potential takedown turned into a big hug between the two footballers and the deal was sealed.

“It was a cool moment,” said Tanners Dad.

We just don’t see a lot of hands on recruiting like that anymore these days…and that’s too bad. Teachers and coaches are hesitant even to touch students fearing allegations of untoward behavior between the pupil and the mentor.

Bo Pelini is not exactly what we could call a quiet presence on the sidelines. The rants and raves, jumps up and down and even waves his arms at the refs during the course of a contest. There is never any doubt that the man is into his game.

He was like that at LSU and many in Baton Rouge were sorry to lose him even if it was to go on to his first head coaching job at Nebraska… and Bo Pelini has done an admirable job in his seven years with the Cornhuskers.

Last season had its tense moments for Pelini. He got caught on tape being pretty angry at some ‘Husker fans and using all the most colorful sorts of language in doing so. But in the end nothing really ever came of it. The powers that be in Nebraska know him by now and are very familiar with Pelini’s passion for the game which he wears on his shirt sleeve.