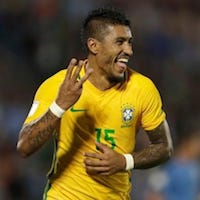 Brazil, the leader of the 2018 World Cup South American Qualifiers, visited Uruguay’s Centenario Stadium in Montevideo with hopes of securing its first-place lead and thanks to a sharpshooting Paulinho and an effective Neymar they did just that.

The five-time world champions earned a 4-1 away win against a Charrua team that started winning the game 1-0 but the Brazilians were deadly accurate with the scoring opportunities they created.

Both teams started the game pressing, looking for a hole in the opponent’s defense to open the score and the first to do just that were the Uruguayans.

A foul on Edinson Cavani in the ninth minute gave them a penalty kick and the striker decided to take it himself. The PSG forward scored and made it 1-0 for the locals.

But the great pregame expectations that the Uruguayan fans had vanished after Paulinho tied the game in the 18th minute with an awesome long-distance shot.

The visitors took advantage of the halftime adjustments and in the 52nd minute they mounted a counterattack in which Joao Coutinho shot on goal only to have the ball deflected by the goalie Martin Silva, but the rebound fell at the feet of Paulinho who did not hesitate and pushed it to the back of the net.

Then it was FC Barcelona’s striker Neymar, who after a long distance pass he escaped with memorable run from the wing to find himself alone in front of the goalkeeper and beat him with a lovely short lob for the Brazilians’ third goal.

It was the stellar for Paulinho who in aggregate time, scored the hat trick with his chest following a pass from Dani Alves.

Brazil’s now leads the qualifiers with 30 points, followed by Uruguay with 23 and they could now secure their world cup berth as soon as next week depending what results the upcoming games produce.