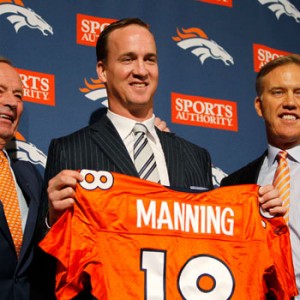 NFL fans are incredibly excited about the fact that Peyton Manning has joined up with the Broncos. They feel like this season is going to be a huge one, and that Manning will bring the team to success like it has never known before. Because of this, people are already placing their bets on the Broncos and expecting them to perform well. All too often, when this kind of thing happens, it’s because of wishful thinking on the part of the fans, but it’s looking like, for once, they might be on to something! The Vegas oddsmakers are tending to agree; they too think this should be an amazing season for the Broncos.

When Manning was released by the Indianapolis Colts earlier in the year, people were not happy! After all, Manning has played for the team throughout the entirety of his 14 year career. However, seeing as how he is a four time NFL Most Valuable Player, fans felt he’d be quickly snatched up. Many seemed to “wait and see” if his neck injury was going to affect his playing before making a move, but the Broncos came into the picture and grabbed Manning quickly enough.

At first, there were big questions about what would become of Tim Tebow. At the time that Manning was welcomed onboard, Tebow, a 2007 Heisman Trophy winner, was the “big star” of the team. Manning coming into the picture stood to jeopardize his status. Though Manning promised to be a “good teammate” to Tebow and though many felt his departure would be a huge mistake for the Broncos, Tebow did decide to call it quits, choosing to join up with the New York Jets.

Despite Tebow’s departure, fans and oddsmakers alike aren’t at all concerned. They think Manning, despite his recent injuries, has what it takes to carry the team to victory. Of course, only time will tell. The speculations could always turn out to be all wrong, but no signs point to that happening. No matter how you feel about the Broncos or about Tebow’s leaving, most can agree that Manning deserves a good season after all that he’s been through.