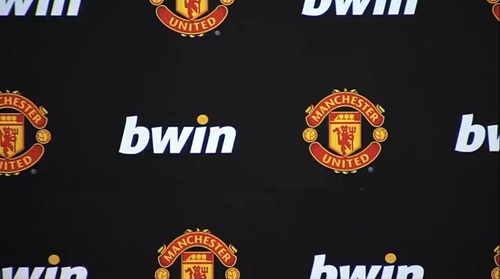 One of Europe’s biggest bookmakers has just announced a new partnership with the giants of the premier League, the Manchester United. The deal was announced at Old Trafford, and the bookie was named the club’s official betting and online gaming partner.

This partnership was made public this August, and emblematic figures of the Red Devils such as Sir Alex Ferguson, Rio Ferdinand, Wayne Rooney and Nemaja Vidic were there to presence the signing of the deal.

Although the exact figures of the deal haven’t been disclosed to the public yet, it’s suspected that the recent trade of Robing Van Persie was almost entirely financed by the profits of this deal. This is not the first time bwin has signed with a major team. Similar deals have been made in the past with teams of the caliber of the Real Madrid of Span and Milan of the Italian league.

The deal was signed for a three-year term, and aims to boost the presence of the already popular club on the United Kingdom’s market. Among the details disclosed by both parts, this freshly signed deal will include changes such as the integration of the betting company into the Man United’s website, co-branding games and joint marketing campaigns.

Saying that signing a partnership with the popular soccer club was a smart move is an overstatement. The Manchester United is by far one of the flagship teams of the premier league. And with a fan base of almost 700 million followers around the world, the exposure the brand will receive is potentially huge.

Although this bookmaker is known for the multiple betting options they offer, approximately half of their sports betting revenue comes from football. And with their recent incursion in the social gaming market, joining forces with an established brand with millions of fans all over the world seems like a reasonable next move.

The fans will also benefit from this joint venture. One of the first perks that are being offered is two season tickets to fans that place bets on the Manchester using their services. Social games based on the Red Devils.

All parts involved, including the fans, seem to be quite pleased with the outcome of the deal. The shared passion for football is the main reason why this deal seem to be a no brainer. It’s just a matter to wait and see innovating products, offers and social games that will open the market for countries that still don’t permit legal online gambling and betting.