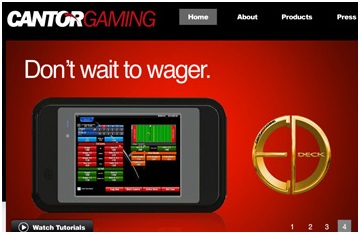 The NFL is pushing ‘Fantasy Football’ big time. The first category available to click on when you bring up nfl.com is FANTASY… right after the NFL logo and before News & Media. Roger Goodell and the commissioner’s office seems to have placed a high value on the Fantasy Football League promotions.

If Goodell is involved, you can bet that somewhere in the whole process is a way for the NFL club owners to make a lot of money.  That’s why they pay him $30 million a year… to make them more money.   But wait… Roger Goodell has come out as being opposed to using his beloved sport to wager on, right?

Now we read that Cantor Fitzgerald, the global financial services giant from the UK who just happens to own Cantor Gaming which just happens to operate seven of the largest sports books in Las Vegas is in the process of investing $25,000,000 through Cantor Ventures into a company called TopLine Game Labs of California.

Geller recently told the press, “The launch of TopLine Game Labs marks a new era in next-generation fantasy sports and social gaming.  We are architecting a robust platform to power exciting new sports and entertainment based social games. With our initial focus on the innovative and fast growing short-duration fantasy sports marketplace, combined with our ‘mobile-first’ philosophy, we are superbly poised to expand into other categories, delivering a one-stop online and mobile gaming solution.”

The ‘superbly poised to expand into other categories’ part of that quote raises some interest… and probably some eyebrows.  Is he indicating that his company will have all of the infrastructure in place to facilitate Internet wagering on sports the same day that it becomes legal?

Geller said that he plans to capitalize on the best attributes of the previous Cantor Fantasy Sports offering like daily fantasy sports play without season long restrictions and to take advantage of Cantors experience from the ownership of the popular Hollywood Stock Exchange which is the leading virtual entertainment stock market and offers tremendous growth potential.