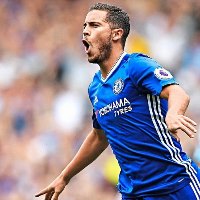 Two Eden Hazard goals brought Chelsea closer to their objective of winning the Premier League on Wednesday and finally knocked out Manchester City (2-1) off the fight. With this defeat the Citizens are now 14 points behind the leader.

Chelsea recovered from last Saturday’s setback at home to Crystal Palace (1-2) and defeated a Man City that now has Arsenal, who thrashed West Ham (3-0), tightening the race for fourth place in the table, the last position that gives access to the Champions League.

Chelsea’s Antonio Conte made only a change from his last eleven, and started French central Zouma instead of Nemanja Matic. Cesar Azpilicueta returned to the right lane, Zouma formed alongside Cahill and David Luiz at the rear end, and Pedro stood as an attacker with Hazard and Diego Costa.

Meanwhile Pep Guardiola surprised with the start of the captain Vincent Kompany, in a starting lineup for the first time since November, instead of Nicolas Otamendi.

Barely 10 minutes in, Chelsea struck first when Hazard released a shot that found its way past keeper Willy Caballero after his defenders partially blocked his view of the shot.

Man City equalized in the 26th minute after a huge error by Thibault Courtois: the goalkeeper, cleared the ball poorly and gave it to David Silva and although his shot was saved by Courtois the rebound went to Sergio Aguero, who with a simple touch sent the ball to the back of the net.

It took Conte’s men only nine minutes to respond, after Pedro was fouled inside the penalty area by Kompany. Hazard’s shot was saved by Caballero, but the rebound went straight to his feet and the Belgian took advantage to score the go-ahead goal and give his club the 2-1 victory at Stamford Bridge.