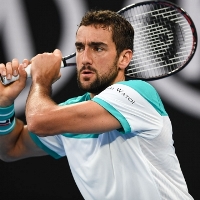 The 2018 Australian Open first semifinal features an unexpected matchup between Croatian Marin Cilic and British player Kyle Edmund that most tennis pundits didn’t even see coming before the tournament began.

Cilic ranks 6th in the world, so some could have foreseen him reaching this semifinal, but his opponent is 49th in the ATP ranking so, to see him here has surprised a lot of tennis enthusiasts.

Of course, the media had chosen Nadal to be here instead of Cilic, but the Spaniard, who was playing some great tennis in the tournament had to withdraw with a thigh injury when he was trailing 2-0 in the fifth set.

Edmund has been playing some excellent tennis along the way, beating some top -caliber players (like South Africa’s Kevin Anderson and Uzbekistan’s Denis Istomin) proving that he fully deserves to be here.

Cilic’s serve is slightly better than Edmunds, but his monstrous forehand is considerably better. Thus, Cilic is going to serve and hit big with his forehand to try to force Edmund to use his backhand, which is his weaker shot.

The British player, however, does have a few advantages to his game as he moves on the court a lot better than Cilic. As a result, look for Edmund to use that movement to drag Cilic around if he manages to save a few of his serves and gets him into rallies.

The pair has actually met once before. It was last November at the Shanghai Masters, where Cilic won 2-0 (6-3 and 7-6) in the second round. Based on that recent result and their performance in Melbourne Cilic could be considered a slight favorite, but Edmund keeps getting better and better as the tournament progresses.

Cilic is playing at a higher level than Edmund right now, but on a good day, the Britton is skilled enough to defeat the Croatian as he proved with his quarterfinals victory over world No. 3 player Bulgarian Grigor Dimitrov in four sets (6-4, 3-6, 6-3 and 6-4).

Edmund goes into this semifinal full of confidence, knowing that he’s just beaten a player who is on the same level as Cilic or even better. Cilic, on the other hand, reaches this semifinal a little fresher as he has yet to play a full five-set match.

This is a tough match to predict but considering that Cilic has experience playing in the late stages of major tournaments, along with the fact that he’s fresher having played shorter matches, it’s logical to pick him to win here and move to his third Grand Slam final since 2014.