Clayton Kershaw On A Roll 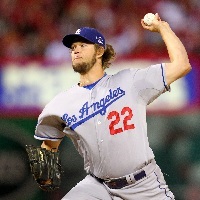 Dodgers catcher A.J. Ellis is having a great year catching for Clayton Kershaw this year. After the two hit shut out that Kershaw pitched against the San Francisco Giants over the weekend, Ellis told reporters, “We’re experiencing and witnessing something historic, and being on the receiving end of it is humbling.”

Clayton Kershaw’s record so far this season stands at 12 wins and 2 losses with an ERA (earned run average) of just 1.76. Remarkable considering the type of roller-coaster season the Dodgers are experiencing this year. But Kershaw goes on unfazed. His job is to win games and that’s what he does.

The entire baseball world was hanging onto every pitch when Kershaw was putting together his recent string of hitless innings. But Kershaw was more worried about winning the game that night. Even when Vin Scully commented that “the string of pearls is broken” is his usual poetic prose, Clayton Kershaw just went about the business of winning the game, which he did.

So now it seems that there is every possibility of the young lefty to take home his third Cy Young Award.

His campaign for a third National League Cy Young Award continued with a two-hit shutout as the Dodgers beat the Giants, 5-0, reclaiming the top spot in the NL West for the first time since the All-Star break.

Kershaw is 12-2 with a 1.76 ERA and is on a nine-game win streak. He has four complete games and two shutouts, one a no-hitter. He’s 12-5 lifetime against the Giants and 7-2 lifetime with an 0.69 ERA at AT&T Park. His 14 consecutive quality starts against the Giants are the most since Hall of Famer Bob Gibson.

“We’re experiencing and witnessing something historic, and being on the receiving end of it is humbling,” said Kershaw’s catcher, A.J. Ellis.
Kershaw allowed a first-inning single to Gregor Blanco and a seventh-inning single by Michael Morse, both up the middle. He struck out seven, including the side in the fifth inning, walked one and threw 117 pitches.

“He’s unbelievable, but for me, no surprise,” said Juan Uribe. “I think he can do it every time.”
Manager Don Mattingly, who enjoyed seven scoreless innings from Zack Greinke Friday night, said Kershaw was facing his last batter when the game ended on Tyler Colvin’s foul out to Ellis.

“Yeah, you do get spoiled, honestly,” said Mattingly. “With Clayton and Zack, most clubs try to get to them early. If they don’t get them, they end up with low pitch counts and [opponents] get the full dose. I can’t say it’s a bad plan, but it’s a dangerous one.”
Added Giants manager Bruce Bochy: “Kershaw, he was good. He’s one of the best. He’s a four-pitch guy, it’s hard to see the ball off him, he’s throwing 94-95. You hopefully find a way to get on base and put some pressure on him, which we couldn’t.”

With the lineup at full potency, Adrian Gonzalez continued his hot hitting with a pair of doubles and a single, while Hanley Ramirez and Uribe each went 2-for-4. Gonzalez is 13-for-31 with eight RBIs on the trip that ends Sunday.

“The way our team is, a veteran team, we see a [opposing starter] once through [the lineup], the next time through we have a pretty good chance,” Kershaw said of his offense, which scored 11 of its 13 runs this series in the fourth through seventh innings. “They’ve got a great team over there. We’ve got the lineup we want right now. Knock on wood, we’re pretty healthy right now.”

The Dodgers scored the first run on a ball lost in the sun and a broken-bat hit off Ryan Vogelsong. By that time, the Giants’ defense — other than outfielders Hunter Pence and Blanco — was in the shade. Vogelsong was working on a no-hitter, with plenty of help from his defense, but when Gonzalez lashed a line drive toward Pence, he lost the ball in the sun and it rolled to the wall for a two-out double.

On a 3-2 pitch, Ramirez popped a broken-bat single down the left-field line that scored Gonzalez just before Ramirez was thrown out at second base.
The Dodgers opened the fifth inning with three more singles from Carl Crawford, Matt Kemp and Uribe for a second run. The Dodgers opened the sixth with two more hits — an infield single by Puig (despite a spectacular try by shortstop Brandon Crawford) and a hit-and-run double by Gonzalez that sent Puig to third.

After Ramirez was barely thrown out at first by Vogelsong on a comebacker, second baseman Dan Uggla made a diving stop of Crawford’s sharp grounder, only to bounce his throw home as Puig scored. Gonzalez was thrown out at the plate by Pablo Sandoval on Kemp’s tapper, but Uribe doubled home Crawford.

The Dodgers added a run in the seventh off reliever Jean Machi on a single by Dee Gordon, a ground out by Puig and a single by Gonzalez that scored Gordon as left fielder Morse threw the ball in to third base.