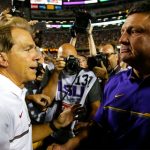 We all know about Alabama and Clemson, but let’s face it, this is getting to be a little like watching reruns of Happy Days, very nice, but we’ve seen it one time too many now.

However, to fix this problem, someone is going to have to show up and beat one or both of these elite teams for the NCAA College Playoffs this coming season, because they are both still very strong.

The preseason picks are simply speculation. Granted it is speculation based on the abundance of information available these days covering all things in sports and resulting in an ever increasing transparency. It’s hard to keep a secret these days; especially on Twitter.

A popular running back twists his ankle in practice one afternoon and it shows up all over the internet that same evening. Everyone knows what everyone else has, mostly.

But the preseason polls do give us a pretty good idea as to where the power lies in each conference. Once again the top ten is top heavy with SEC teams starting with Alabama at #2, Georgia at #3, LSU at #6 and the Florida Gators at #8.

The Gators have already proven themselves on the field by beating a very good Miami Hurricane team, which is barely out of the top 25 rankings, in the first college football game of the season.

The Dawgs of Georgia remain very strong. They expected to be right about where they are at number three.  However, LSU suddenly finds itself ranked #6 in the preseason polls and listed at 25-1 to win it all.  But first Coach O and his Tigers have to get past Alabama at Alabama.

That high ranking scares some Tiger fans and ignites others.  Hold on to your Tiger Tails.  Quarterback Joe Barrow insists that the Tigers will score “a lot of points this year”, which is music to the ears of long suffering LSU fans who have had way too much of off tackle plays and missed passes in recent years.  It’s time to put the go in the ‘GEAUX TIGERS’ and reclaim the national championship that the Tigers last won back in 2011.

Clemson, of course, is ranked number one by virtue of being the defending national champions after beating Alabama last year.  The year before that Alabama beat Clemson, then, the year before that Clemson beat Alabama.  Then it was Alabama over Clemson….and the beat goes on.

We all know that Oklahoma, Michigan, Ohio State and Notre Dame will all make a good showing this coming year.  Just how good remains to be seen. There are 14 grueling weeks of college football ahead and a team’s season could be decided on a dropped pass or a missed field goal. But these teams are expected to operate at an elite level all season long.

Now, on the outside looking in there are a few teams out there which just might exceed the expectations of even their own coaches and fans. The Wisconsin Badgers are ranked way down at #19 but pose a serious challenge to both Michigan and Ohio State in the Big 10. Under rated head coach Paul Chryst is 42-12 in four years and has his program chomping at the bit for a national championship run behind the running of Heisman trophy candidate Jonathan Taylor.  The Badgers are currently listed at 50-1 to win the NCAA Championship this year.

Also at 50-1 is perennial favorite Notre Dame which boasts another Heisman trophy hopeful in quarterback Ian Book, this year behind a beefed up offensive line that may allow him more time to show his stuff in the backfield.

Yet, the schedule laid out for the Irish this year is nothing short of brutal, as outlined by head coach Brian Kelly, “One of our themes this year for our football team is that we have to be road warriors.  We have to have that mindset of going on the road to Michigan.  We’ve got to go to, certainly, Athens and play at Georgia. We’ve got to go to Stanford, which we haven’t won at Stanford.  So there are a number of challenges”.  Sounds more like a coach’s nightmare.