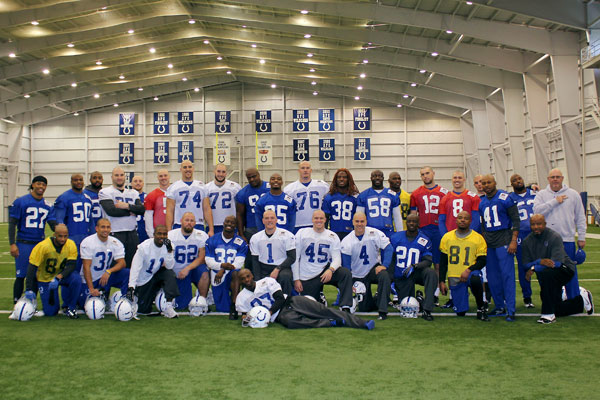 Even Andrew Luck has joined the shaved head squad in honor of his new coach.

Over three dozen players on the Indianapolis Colts Football Team have shaved their heads in a show of support for Coach Chuck Pagano who is undergoing treatment for a form of leukemia.  “Coach Pagano’s an inspiration,” says Colts QB Andrew Luck who just shaved his head in solidarity, along with many teammates. “I love him. We all do.”

“We haven’t been together long … But we’re in this together,” McAfee Twitted.

Luck, the No. 1 overall draft pick and this week’s AFC offensive player of the week added his support to the movement this week after being in the locker room for Paganos inspirational appearance after the Dolphins game on November 4.

Fans in Indy are ecstatic after the terrible season that their Colts had last year after the injury to Payton Manning.  The Luck-Manning swap seems to have turned into a win-win situation for all sides concerned.

Pagano was released from Indiana University Health Simon Cancer Center earlier on Sunday, and was able to see the game from his couch. Team owner Jim Irsay told the team of Pagano’s release from the hospital after the game.

“I was more thrilled with that than the win,” quarterback Andrew Luck said. Luck ran for both of Indianapolis’ touchdowns on the day. Receiver Reggie Wayne who has known Pagano since the two men worked together at Miami 16 years ago, seemed even happier.

Pagano was diagnosed with acute myeloid leukemia, where the bone marrow is producing abnormal white blood cells that interfere with healthy blood cells. Symptoms can include weakness, weight loss and easy bruising or bleeding.

On Monday, Dr. Larry Cripe, Pagano’s physician, told The Associated Press that the illness which has sidelined Indy’s head coach for more than a month was in “complete remission.” Cripe said a morning exam showed Pagano’s white blood cell count and bone marrow tests were normal as he prepares to start a second round of chemotherapy.  Coach Pagano is in our thoughts and prayers.