Cousins’ Defensive Woes Could Cost The Warriors The Title 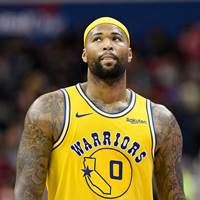 For the fifth year in a row, the Golden State Warriors have positioned themselves as the team to beat and are once again considered the favorites to win the NBA championship.

This year, however, there’s a real issue that could deter them from their winning path and put an end to their sustained supremacy.

The problem was clearly exposed in last night’s Warriors-Rockets game as Houston made a joke of DeMarcus Cousins’ pick-and-roll defense.

Paul easily drove past him on several occasions and there wasn’t much he or his team could do to stop the Rockets from exploiting his weaknesses.

Boogie’s defense is a huge liability against elite perimeter players and teams that thrive at the pick-and-roll.

If the Warriors can’t solve Cousins woes the Rockets could have a real chance against Golden State this year in the playoffs. Harden has the skills needed to destroy Cousins in the pick-and-roll in a seven-game series and if he gets Cousins switched on to him out at the perimeter that will almost always translate into an easy score for Houston.

Cousins has been a liability for the Warriors as of late as other teams are exposing his defensive woes. In the last five games, results haven’t been pretty as Cousins has had a plus/minus of -41 and failed to thrive on offense as well.

Most of the season he’s been an asset with his passing but he’s not done much more on offense. In February he’s shot 40.3 percent from the floor, 18.2 percent from three, and 74.4 percent from the free-throw line. He’s hurting the Warriors’ spacing as he struggles from the perimeter and also takes a lot of low-percentage and contested shots from inside the paint.

Although he’s still recovering from a significant injury and could take him more time to get into the right rhythm of things, the Warriors must decide what to do with him.

If they decide to deal with his struggles while he adapts to his new role and surroundings, he could be ready by playoff time; but if he doesn’t, head coach Luke Walton will have to decide what to do with him because he could end up costing them another run at a title.

Cousins is simply too talented, so if he’s completely healthy he’s likely to start taking higher percentage shots, which should improve his efficiency. The main issue is, however, how much can he improve defensively as he’s always been a subpar defender and a slow player on that side of the floor.

With an injury may still hold him back for months, as it saps many players’ athleticism and speed, the Warriors may have no choice but to sit Cousins in the playoffs against the Rockets and other teams that excel at the pick-and-roll.