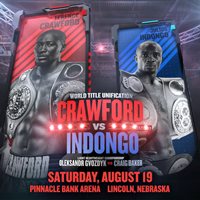 Undefeated fighters Terence Crawford (31-0 with 22 KOs) and Julius Indongo (22-0 with 11 KOs) clash Saturday at the Pinnacle Bank Arena in Lincoln, Nebraska, to unify all Jr. welterweight belts in a historic bout that promises plenty of action.

The last time the four major boxing belts were put into play in a single fight was in 2005 when Bernard Hopkins was dethroned by Jermain Taylor in a middleweight combat.

The fight is attractive to boxing pundits from several points of view due to the physical differences and contrasting styles of the two boxers.

Although Crawford is considered the big favorite, Julius Indongo can’t be underestimated because he’s probably the best of all the fighters that the American has faced so far.

Many have questioned the quality of Crawford’s opponents, but they can all be considered good solid fighters that he defeated with ease.

Thomas Dulorme, Dierry Jean, Hank Lundy, Viktor Postol, Juan Molina Jr. and Felix Diaz are among those who have failed to defeat the American. Of those, only Dulorme proved somewhat challenging, but the rest could not even make Crawford sweat.

Should Crawford defeat Indongo, he Will run out of Jr. welterweight opponents and it’s expected that he will move on to the welterweight division to face more challenging fighters, including the winner of the rematch between Manny Pacquiao and Jeff Horn.

Indongo has presented quite a challenge to his previous opponents and it may not be easy for Crawford to snatch his belts from him.

In theory Crawford should be able to get the win against the Namibian because he’s faster and more skilled, however Indongo physical attributes and Crawford’s usual slow starts could cost him in this fight.

Indongo won his belts in his last two fights. Both were very different, but they allow us to glance at the tools that he could use in Saturday’s fight against Crawford.

In December Indongo defeated Russian Eduard Troyanovsky in Moscow via knockout with just 40 seconds gone in the first round. He caught the Russian off guard and sent him to the canvas with a powerful left-handed punch.

In April, he traveled to Glasgow and defeated Scottish boxer Ricky Burns via a unanimous decision in a 12-round bout that he utterly dominated.

Crawford is also way better than Indongo’s previous opponents, but the African could catch him off guard and knock him out just like he did with Troyanovsky. Also, if Crawford fails to adapt quickly to Indongo’s reach he could very well end up being punished hard and often.

Crawford tends to study his opponents in the first few rounds and then adapts to his strategy accordingly, but against Indongo he may not be able to do that because of the African’s power and reach.

If Crawford adapts quickly or survives the initial rounds he will win the fight because none of his previous opponents have found a way to beat him after he changes strategies.