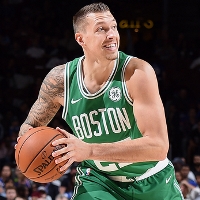 The Boston Celtics have been hot lately winning eight of their last 10 games as they have made some changes to their rotation that seem to be working out so far.

They benched shooting guard Jaylen Brown and small forward Gordon Hayward and that seems to be having a positive effect on the team as it’s led to more balance in the different lineups that head coach Brad Stevens is using.

A key factor in the Celtics current run has been center Daniel Theis, who has been an integral part of the team’s success with great play on both ends of the floor.

With center Al Horford out Theis has become a threat from everywhere on the floor. In the paint, Theis is a solid finisher in the pick and roll and can score easily in the post whenever he has small guys guarding him.

This has led to the Celtics scoring a lot of easy points on pick and roll situations where the ball handler (mostly Hayward) finds the usually open Theis for an easy alley-oop.

Theis has proven to be very mobile for a guy of his size, something that allows him to drive quickly to the basket from the perimeter to the paint. He’s a player that puts a lot of pressure on the interior defense given his efficiency at the rim.

When he faces defenders on the inside, he has the basketball IQ and passing skills to quickly kick the ball out to the open shooter at the perimeter.

The German center is also a great three-point shooter as he’s nailing 41.7 percent from his shots beyond the arc. This help the Celtics stretch the floor and allows his teammates to get open driving lanes.

Theis can do it all on offense, and while he usually doesn’t put up huge scoring numbers, he’s an efficient and very effective player that does the little things right, allowing the Celtics offense to run smoothly.

On defense Theis is very versatile and multi-talented. He was Germany’s defensive player of the year in 2017, and his defensive abilities have successfully translated to the NBA.

He’s a solid rim protector that has great instincts and timing to contest and block shots. The main setback in Theis’ defensive game is that he picks fouls very quickly (7.8 fouls per 36 minutes played), something that at times has gotten the Celtics in the penalty too quickly.

Theis energy on both sides of the ball of the floor has been a huge asset for the Celtics, but if he wants to take his game to a whole new level, he needs to cut back on his number of fouls as this limits his time on the floor.

He’s a great player to have off their bench for about 15 to 20 minutes per game or so, but he won’t be able to consistently get minutes on the floor once Horford returns if he doesn’t find a way to limit the number of fouls he constantly picks in each game.