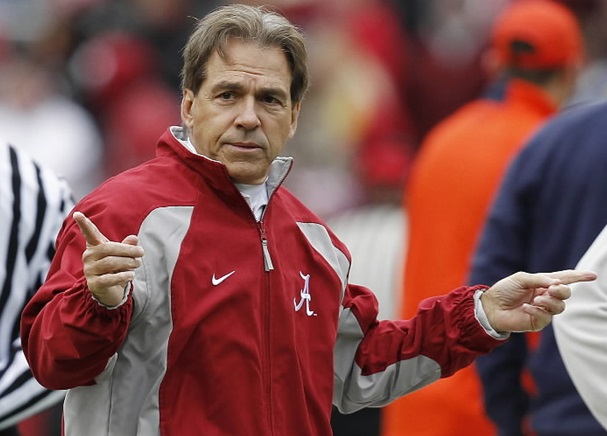 He did it to himself and to his team. Nick Saban argued vigorously for that one second to be put back on the clock as if he had been cheated out of it.  Well, he got it and the rest is SEC history. Actually not just SEC history. The ending of that game was one of the most remarkable in the history of college football.

With that one second put back on the clock, Saban elected to go for a long field goal of 57 yards with his backup kicker whose longest boot the year was from 20 yards out. The kick came up a little short and was fielded by Auburn speedster Chris Davis.

Davis brought the ball out and proceeded to waltz through the heavy linemen that Saban had playing on the field goal attempt and they just could not get a hand on Chris Davis who ran the ball back the length of the field for the game winning touchdown with just seconds remaining on the clock.

In that one second, Nick Saban and the Alabama Crimson Tide lost the SEC Championship as well as their shot at winning an unprecedented third NCAA National Championship and a lot more.

So now, instead of playing in Pasadena on January 6th, the Tide will end up back in New Orleans at the Super Dome playing in the Sugar Bowl against the Oklahoma Sooners, and that one won’t be easy either Nick.

Las Vegas oddsmakers opened the spread on the Sugar Bowl, which will be played on January 2nd, with Alabama as 15.5 point favorites over the Oklahoma Sooners.  Maybe those guys didn’t see the Sooners game against Oklahoma State last week.  Oklahoma has a pretty good football team and that number is going to look awfully large to bettors.

Some courageous reporter stuck a mic in Saban’s face as he was jogging off the field.  What the question was got lost in the noise of celebration but Saban’s answer was classic, “It shouldn’t have ended that way.”

They are selling T-Shirts now… I think I saw one in Purple & Gold… that say, ‘Daylight Saban Time’ and below, ‘set your clocks back one second’. Pretty cute.