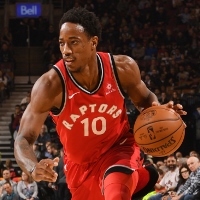 Toronto Raptors shooting guard DeMar DeRozan has been enjoying an outstanding season so far with averages of 23.7 points, 5.2 assists and 3.9 rebounds per game to go along with 1.2 steals while shooting 46 percent from the field, 32.7 from three-point land and 82.7 percent from the free-throw line.

However, the most important part is that he has led the Raptors to the number one seed in the Eastern Conference. Despite all these accomplishments Toronto and DeRozan are getting little love and respect Even though it’s safe to say that DeRozan is a top MVP candidate, he and his team are not getting the love and respect they deserve.

Although his stats are not as great as some of the other MVP candidates such as Houston’s James Harden or Milwaukee’s Giannis Antetokounmpo, he’s been just as effective and vital for the Raptors’ rise to the top of the Eastern Conference.

DeRozan’s the Raptors’ leading scorer and his ability to score from anywhere on the floor makes him lethal. This season he’s still capable of shooting from mid-range, but unlike previous seasons he has now really improved his three-point shooting.

He’s attempting a career-high 3.5 attempts per game from downtown this season and he’s shooting a respectable percentage to keep defenses honest while he’s out on the perimeter. This leads to the creation of more scoring opportunities as driving lanes open up for him and he takes advantage of this thanks to his finishing skills at the rim.

Even though he isn’t scoring as much as he did last season. He’s more versatile as a scorer and he has more than made up for it with his passing.

DeRozan is averaging a career-high 5.2 assists per game and he’s really stepped up his passing ability this season. He’s one of the top facilitators for the Raptors and has the ability to be a secondary playmaker.

DeRozan has made better and smarter decisions with his passing this season and that has opened up the team’s opportunities to get more open attempts from three and scoring occasions for other players on the team such as CJ Miles and even Kyle Lowry.

Although DeRozan’s defense hasn’t been amazing this season he’s been better than in previous years. A big reason for this is the addition of OG Anunoby, who has been a great defender for the Raptors as a rookie.

With Anunoby on the opponent’s top forward or perimeter assignment, DeRozan can get a break on defense as he guards a lesser threat. This has allowed DeRozan to post a defensive rating of 108, which is tied for his second-best in his entire NBA career.

Even though James Harden is still the favorite to win the MVP award this season and the Rockets currently own the best record in the NBA, is uncontestable that DeRozan should get more recognition for his improved play as he and Lowry are showing they can lead the Raptors to a deep run in the playoffs.