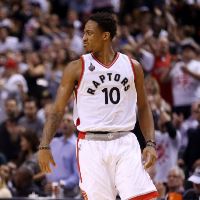 DeMar DeRozan matched his career playoff-high with 37 points, Jonas Valanciunas had 19 points and 14 rebounds and the Raptors beat the Washington Wizards 130-119 on Tuesday night as Toronto took a 2-0 lead in a playoff series for the first time in franchise history.

Kyle Lowry had 13 points and a career playoff-high 12 assists as Toronto set team playoff records for points in a quarter, a half, and a game.

DeRozan equaled his total from Game 3 of the second round against Cleveland last year. It was his 12th career 30-point game in the postseason. The Raptors are 9-3 in those games.

DeRozan connected on 14 of his final 21 attempts, including three of six from long range. He also converted a four-point play.

Toronto, which made a team playoff record 16 3-pointers Saturday, connected on 13 of 35 from long range in Game 2, making only two in the second half.

Wall scored 29 points, Mike Scott had a career playoff-high 20 and Ty Lawson 14 for the Wizards, who host Game 3 on Friday night.

Wizards guard Bradley Beal missed eight of 11 shots and finished with nine points. Beal had more fouls in the first half (three) than made baskets (two).

Miles stopped the run with a long 3, Toronto’s first of the second half, and the Raptors put it away with a 17-4 spurt over the next four minutes.

Toronto set a team playoff record with 44 points in the first quarter, including 13 from DeRozan, and led 44-27 after one. All five starters made at least one 3-pointer as the Raptors shot 7 for 13 from long range.

Miles made three 3-pointers and scored 11 points in the second and DeRozan added seven as Toronto broke its playoff record for points in a half by taking a 76-58 lead at halftime.