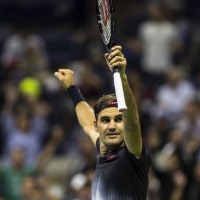 The Swiss played an erratic game loaded with errors, however, he showed no signs of the back pain that affected him in Montreal and forced him to miss the Cincinnati Masters.

Federer had to work longer than expected to defeat an opponent 17 years younger in two hours and 37 minutes of play.

The initial set was surprising. Tiafoe dominated with his hard backcourt strokes and Federer helped the American by adding 18 unforced errors. A break in the first game was enough for the young player to take the set in what seemed almost like an effortless performance.

However, Federer gradually recovered as he began to reduce the number of errors and make Tiafoe chase the ball from side to side of the court to even up the actions and pile up the points.

The Arthur Ashe Stadium, which initially supported the young American, began to surrender to the Swiss legend. Tiafoe lost his focus and began to help Federer with unforced errors as he left the ball on the net or sent the ball out on repeated occasions.

That way, the 19 Grand Slam champion, won the second and third sets and seemed to be heading to what looked like a simple victory after a slow start.

However, the five-time US Open winner relaxed too soon and Tiafoe, who looked defeated, appeared revitalized in the fourth set. In shocking fashion, he overwhelmed Federer in 24 minutes to take the fourth set.

Once again, the fans came alive as the 19-year-old did not give up and was still playing hard in the fifth set.

However, the experience prevailed as Federer broke Tiafoe twice in the fifth set to advance to the second round.

Federer led 5-3 and was serving for the match in the ninth game, but Tiafoe broke Federer’ serve to make it 5-4.  The Swiss, however, broke Tiafoe’s serve in the 10th game to take the match.

In the next round, Federer will face the winner of the match between Russian Mikhail Youzhny and Slovenian Blaz Kavcic, which was postponed due to rain falling in New York.

For that reason, the only other scheduled men’s match that was completed was Rafael Nadal’s victory over Serbian Dusan Lajovic 7-6, 6-2 and 6-2.