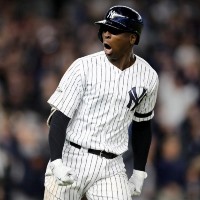 The Yankees won the A.L.D.S 3-2 over the Indians, who were the favorites to represent the American League in the World Series once again after losing to the Chicago Cubs in seven games a year ago.

With their win the Yankees, who trailed in the series 2-0, now earned the right to face the Houston Astros starting Friday at Minute Maid Park. Houston punched their ticket to the A.L.C.S by eliminating the Boston Red Sox by 3-1 to the best of five.

The Yankees, who survived an elimination game for the fourth time in this postseason, advanced past an Indians team that won 102 games during the regular season and had a record streak of 22 consecutive wins.

With this defeat, the Indians title drought turns 70 next year, the longest in the majors.

Gregorius hit his first homer in the first inning off starter Corey Kluber, with no runners on and two outs. Gregorius homered off Kluber again in the third inning, with one on and one out to increase the Yankees lead to 3-0.

In the top of the ninth inning, Brett Gardner hit a two-run single to right field to score the Yankees fourth and fifth insurance runs.

David Robertson (1-0), who worked 2.2 innings, striking two and allowing a walk, earned the win. Cuban closer Aroldis Chapman threw two innings and struck out seven to earn his second save of the postseason.

Kluber (0-1) took the loss after allowing three hits, two home runs, and three runs in 3.2 innings as he once again let the Indians down with another subpar performance.

Kluber was one of MLB’s best pitchers all season, winning 18 games and leading the AL with a 2.25 ERA.

However, in the postseason the right-hander struggled. He allowed nine runs, including four homers, over 6.1 innings in two postseason starts, hardly what he or the Indians expected.