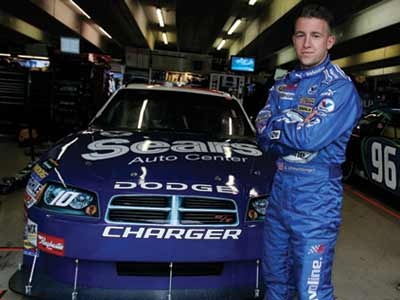 A.J. Allmendinger was tired of losing.  Two hundred and eleven races without a victory in that hot noisy car were quite enough, thank you. But Marcos Ambrose was supposed to win at Watkins Glen. He had already won the event there in 2011 and 2012 and seemed eager to repeat in 2014

Watkins Glen is a road course, one of only two on the NASCAR circuit.  That means that the drivers actually have to make some right hand turns…..on every lap.  Some take right to it, but others never quite seem to get the hang of it.  Sure they can make right hand turns all right, but at over 150 miles per hour and surrounded by 700 horsepower race cars, it ain’t that easy.

Marcos Ambrose is known in NASCAR circles as a sharp road course driver and he has proved that time and again.  Ambrose was right up there in the hunt among the top three cars throughout the 90 laps over the 2.45 mile road course at Watkins Glen.  It sure looked like he had it all under control.

But Marcos didn’t know, yet, that the ‘Dinger’ as AJ is affectionately known down in the pits, was bound and determined to be there for the checkered flag at the end of his 212th NASCAR Sprint Cup race.  Ambrose pushed hard on the last restart with just two laps remaining in the race, but Allmendinger was not to be denied…and he pushed right back….hard enough to win.

After the race an elated Allmendinger told reporters, “I knew Marcos was going to try to move me out of the way if he had the opportunity.  To his credit he didn’t wreck me.  He just moved me like he should have.  I went down into the next corner and leaned on him a little bit to see if I could get a gap and get them racing behind me.  I knew if I could just get a three or four car length gap, they weren’t going to get back to me.  That was just a fun race.”

In NASCAR lingo, the two cars ‘traded some paint’ during the exciting final run for the finish and they had the entire gallery on their feet cheering as the cars and drivers raced across the line.  It fact the almost the entire race was marred by accidents which brought out a record setting 8 caution flags at the Watkins Glen track.