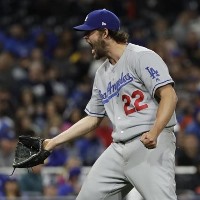 The Los Angeles Dodgers (64-29) face the Chicago White Sox today aiming to win their tenth straight ballgame and cement themselves as the winningest baseball team in Major League Baseball.

The Dodgers beat the Miami Marlins 3-2 last Sunday for their ninth consecutive win and 64th win of the season. The Dodgers have proven to be the best of the NL West division as they lead by 10.5 games in front of the second place Arizona Diamondbacks and ahead of the Houston Astros, which lead the American league with a 62-31 record.

To achieve their 10th straight win the Dodgers will send southpaw Clayton Kershaw (14-2) to the mound. Kershaw has a 2.18 ERA, 159 strikeouts and only 22 walks in 132.1 innings pitched this season.

The White Sox are last in the AL Central with a 38-52 record, will give Mexican right-hander Miguel Gonzalez (4-8) the difficult task of subduing an offense led by rookie Cody Bellinger, who has 26 homers and 61 RBIs. Other important batters that Gonzalez will have to watch for are Cuban right fielder Yasiel Puig (18 homers, 47 RBIs) and shortstop Corey Seager (14 homers and 46 RBIs).

Today will also see the debut of experienced Dominican right-hander Bartolo Colon with the Minnesota Twins in the second game of the series against the New York Yankees.

Colon, 44, arrives to the Twins from the Atlanta Braves, where he had a poor season with a 2-8 record and an 8.14 ERA along with 42 strikeouts and 22 walks in 63 innings pitched.