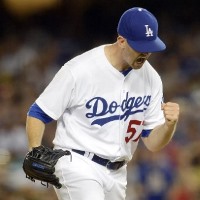 The Dodgers scored five runs in the eighth inning to break the 1-1 tie with the White Sox, who started Miguel Gonzales but left the game without a decision after pitching six innings, striking out four batters, allowing five hits, three walks and just one run.

Dodgers starter Alex Wood also left the game without a decision despite pitching seven innings, allowing one run, no walks and striking out six batters.

Chicago (45-71) took the lead in the first inning with a solo homer by Tim Anderson, who now totals 14 in the season.

The Dodgers scored the go-ahead run on a hit-by-pitch after Jake Petricka hit Joc Pederson with bases the loaded in the eighth inning to start the five-run onslaught.

Pinch hitter Austin Barnes and shortstop Corey Seager added a two-run single each in that same inning that sentenced the game.

The Dodgers still hold the best record in baseball and they command the National League with ease as the N.L East-leading Washington Nationals own a 71-46 record, while the Chicago Cubs sit atop the mediocre N.L Central with a 62-56 mark, just one and a half game in front of the St. Louis Cardinals (61-58).

In contrast, the Dodgers lead the N.L West by 18.5 games in front of the Arizona Diamondbacks and Colorado Rockies, who own the same 66-53 record.

In the American League, the suddenly struggling Houston Astros still lead the A.L West and own the best record at 73-46, but they are being closely followed by the A.L East-leading Boston Red Sox (68-51).