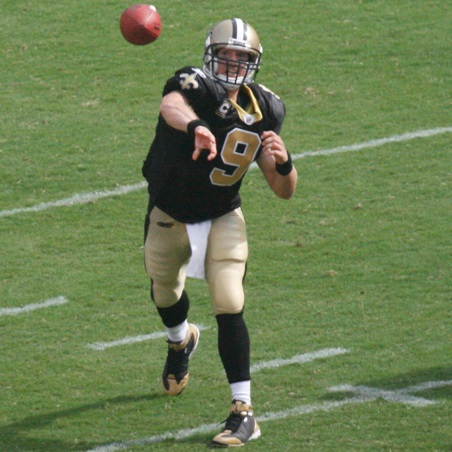 Brett Farve had 71,838, Peyton Manning has 64,009, Dan Marino had 61,361 and John Elway had 51,475. That’s a pretty heady club to join and admission does not come cheap. Peyton Manning was the only active member until the last edition of Monday Night Football when the membership welcomed Drew Brees of the New Orleans Saints who passed the 50,000 career passing yard mark against the Carolina Panthers.

It was a good night all around in New Orleans. The Saints were back home in their dome and winning again after getting their butts kicked up in Seattle the week before. But low spirits do not last long in the ‘Big Easy’ and Saints fans showed up at the Super Dome looking for all the world like a ‘Black & Gold’ version of Mardi Gras. Few venues in the NFL can keep up with New Orleans for sheer pageantry.

And the dome was the place to be on that particular Sunday when the noon games kicked off in temperatures well below freezing and men with blowers and heaters out there trying to find the football field. Thanks to the magic of TV the fans were able to at least tell where the teams were on the field thanks to the superimposed line and yard markers. Players in the center of the field could not even see the sidelines well enough to receive signals from their coaching staff.

Drew Brees threw for 313 yards against Carolina on Monday evening to gain admission to that exclusive club of four. The only other member of the club who is still active is Peyton Manning. Elway is running the Broncos, Marino is a commentator for CBS Sports and Brett Farve is happily coaching high school football.

NEW ORLEANS — Drew Brees saw his face on giant Superdome video boards, then nodded and smiled as a jubilant crowd applauded the star quarterback’s latest milestone and the meaningful way in which he hit it.

Brees passed for 313 yards and four touchdowns and New Orleans beat Carolina 31-13 on Sunday night to regain sole possession of first place in the NFC South and snap the Panthers’ winning streak at eight games. In the process, Brees became the fifth quarterback to eclipse 50,000 career yards passing.

Playoff Picture If postseason started today … here’s who’s in, out

The Panthers’ defense had not allowed more than two touchdowns in a game this season until the Saints (10-3) scored three in the second quarter alone, when Brees completed 14 of 16 passes for 159 yards.

The Saints also became the only team this season to score more than 24 points against Carolina (9-4), which entered the game No. 1 in scoring defense, allowing 13.1 points per game.

The Panthers had the ball for 11:30 of the first quarter, showing an early ability to move the ball in the face of an energized and loud Superdome crowd, but only got two field goals out of it after New Orleans came up with clutch third-down stops, including one on third-and-goal from the 6.

“I’m surprised and disappointed. We’re a better team than we played today,” Carolina coach Ron Rivera said. “They have the crowd behind them and they’re on turf, not natural grass, which is a little bit different. It helps them as far as their speed and their timing. The things that they do here, they do very well. We’ll see how things go when they come to Carolina.”

Last Monday night, New Orleans went to Seattle looking to lead the race for the top playoff seeding in the NFC, only to fall 34-7 and drop into a tie with Carolina atop their division.

But the Saints looked like legitimate contenders again in their return home, where they are 7-0. They became the first team not to lose a turnover to the Panthers all season. Brees completed 30 of 42 passes in becoming the first quarterback to pass for at least 4,000 yards in eight consecutive seasons and pass for 30 TDs in six consecutive seasons.

New Orleans now owns a one-game lead over the Panthers with three games to go, but travels to Carolina in two weeks.

“Here we are, attempting to make another run at it,” Brees said. “Obviously, some records and some other things, milestones along the way that you get to share, but I’m just glad to be on the journey with this group of guys.

Brees’ best drive began with 2:01 left in the first half and New Orleans at its own 24. He immediately found Lance Moore for 21 yards, Colston for 19 yards and Darren Sproles for 20, setting up Graham’s 5-yard TD catch to make it 21-6.

Newton was 22 of 34 passing for 160 yards, DeAngelo Williams returned from a quad contusion that sidelined him last week, gaining 52 yards on 13 carries.

“It was a great measuring stick for who we are and where we have to go,” Newton said. “The best thing about this is we have an opportunity to face this team again in two weeks. Those guys just were better than us today. Are they better than us? No.”

The Panthers struggled to move the ball on most drives after the first quarter, when Graham Gano hit field goals of 45 and 24 yards.

Brees’ other TDs went for 8 yards to Graham and for 6 and 15 yards to Colston, who was hardly surprised by the QB’s quick return to form.

“You’ve just got to see him throughout the week,” Colston said. “The man works like I’ve never seen. He deserves every bit of success that he gets.”