EJ Manuel Will Be A Hot Item In NFL Draft 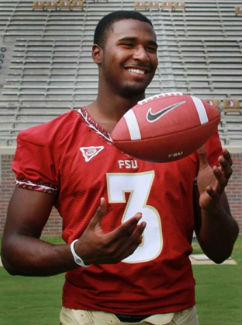 When you look at Florida State Quarterback E.J. Manuel on paper, he looks like one of the top picks in the upcoming NFL Draft. If you saw him play in the Senior Bowl, he was very impressive.  Physically, he is just what the pros are looking for. He definitely has the athleticism and at 6’5” and 240 pounds, he has the size to play with the big boys.

Bucky Brooks of the NFL Network has Manuel projected to be one of the top five quarterbacks taken in the Draft in April. He compares E.J. to Josh Freeman of the Tampa Bay Bucs.  Manuel passes all of the physical tests and requirements with flying colors but there has been some doubt raised as to his work ethic and leadership qualities.  He will need high marks in both of those areas to really succeed in the NFL.

Although he has been criticized for somewhat inconsistent play at times, Manuel is a genuine dual threat prospect and could turn out to be right up there with Wilson, Luck and Griffin each of whom had outstanding rookie years in the NFL. That will only happen if he applies himself and shows the same sort of dedication to the sport and to his team that these guys have us shown us last year.

Erick James “EJ” Manuel played behind Vikings quarterback Christian Ponder except for his senior year at Florida State when he took over the position and went to the Senior Bowl where he gained some momentum towards the NFL with a performance displaying not only his physical attributes but also his leadership abilities when he puts his mind to it.

Projections as to exactly when and where Manuel will  drafted vary wildly with some “experts” calling him the most exciting quarterback available in the 2012 Draft and others placing him as low as a #52 overall prospect.

There are several teams out there who can use a big strong quarterback on the field with the outstanding arm strength.

E.J. Manuel does have a ways to go to become a top rated pro quarterback, but, he is going to the best school in the nation to polish his skills… the NFL.