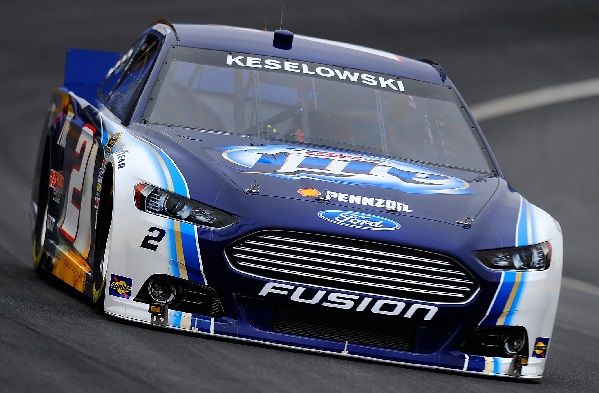 Fords are tearing up NASCAR this season as they have not done in several years. Three of the sport’s most famous race teams are driving the new Ford Fusion body styles and their successes are making race fans stand up and take notice. Someone driving a Ford is going to have a very good chance at taking home the NASCAR Sprint Cup Title trophy this year.

Of course one of the key factors to Ford’s success on the tracks this year are the very talented guys behind the wheel. Roush Fenway Racing is represented by NASCAR’s popular Carl Edwards in the number 99 Fusion who had such an impressive victory at the road race course at Somona in California in June.

Young Joey Logano, driving the number 22 Ford Fusion for Team Penske, has had his first dual win season in 200 starts with NASCAR taking the checkered flag first at Texas and then again at Richmond, virtually guaranteeing him a place in the Chase for 2014.

Another young driver behind the wheel of a Ford Fusion this year is Aric Almirola driving for Richard Petty Motorsports and wearing Petty’s old number 43. Almirola claimed his first NASCAR victory at Daytona in the Coke Zero 400 after two massive wrecks took out most of the field and rain finally stopped the race.

Joey Logano’s teammate with Penske is the brash Brad Keselowski driving the number 2 Fusion who just won a dominating victory at New Hampshire on Sunday. Keselowski got his first win of the season at Las Vegas by default when he passed Dale Earnhardt Jr. who was leading on the last lap when he ran out of gas.

With the victory at Loudon in New Hampshire, Ford has just won 4 major NASCAR events in a row for the first time in almost 10 years. After watching Keselowski and Logano pulling away from the competition all day long, it looks like there does stand a real chance for Ford to win the NASCAR Manufacturer’s Championship for 2014.

Carl Edwards, Brad Keselowski and Joey Logano are all pretty much assured a position in the Chase competition this year. Keselowski is in 3rd place in the point standings with 634 behind Dale with 658 and Jeff Gordon with 670.

Edwards is in 6th place with 574 points followed by Joey Logano in 9th with 551. Also driving the red hot, 900 hp, Ford Fusions are Greg Biffle in 16th place and Marcos Ambrose in 20th.