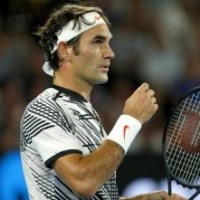 Swiss tennis player Roger Federer advanced to the Rogers Cup round of 16, taking place in Montreal, after defeating Canadian Peter Polansky 6-2 and 6-1.

Federer needed just 53 minutes to win the match against the 29-year-old Canadian player.

This was the first time in six years that Federer is participating in the Rogers Cup, where he will try to continue his winning ways against Spaniard David Ferrer, who defeated American Jack Sock in three sets (7-6, 3-6 and 6-1).

The 36-year-old Federer, winner of 19 Grand Slam tournaments, is having a superb season where he’s won the Australian Open and Wimbledon. He’s also won trophies at Indian Wells, Miami and Halle, Germany.

Federer has won this tournament twice in Toronto (2004 and 2006), but he’s never won it in Montreal, where the event takes place on odd-numbered years.

Serbian Novak Djokovic won last year’s event in Toronto to claim his fourth Rogers Cup; while Briton Andy Murray, who’s missing the event this year with a hip injury, won in 2015 his third one.

Rafael Nadal, who last won this event in 2013, defeated Croatian Borna Coric 6-1 and 6-2, to also advance to the round of 16. The tournament’s top seed will meet Canada’s Denis Shapovalov in the next round.

If Nadal reaches the semifinals of this tournament he will take the world’s number one ranking from Murray, who’s held it since November of last year.

Nadal has not held the ATP’s top spot since July of 2014.