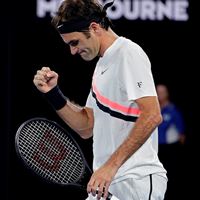 Reigning Australia Open Champion Roger Federer has comfortably progressed to the second round of the Australian Open where he will face German Jan-Lennard Struff who is ranked 55th in the world.

Federer, a 19-time Grand Slam champion, is ranked 53 places above the German. Struff though has a solid game and big serve, which can be very dangerous if he gets it going consistently.

That being said, Federer’s record against big-serving players is exceptional. He knows how to win matches against this type of player, so he will probably not lose any sleep over facing the German even if his serve does get going.

These two have only met once before, at the 2016 Halle Open, and Federer won 6-4 and 7-6.  Federer will once again aim to get a comfortable, if not dominant score, to continue progressing deeper into the tournament.

Federer first-round victory over Slovenia’s Aljaž Bedene (6-3, 6-4 and 6-3) was not brilliant, but he did show flashes of genius as expected from him. He got the job done with a solid display and progressed into this round saving a lot of energy that will benefit him in the deeper stages of this tournament.

Struff advanced to this meeting with Federer thanks to a first-round victory against South Korea’s Kwon Soon-woo (6-1, 6-2 and 6-4), a 20-year-old player he was expected to dominate since he’s ranked 174th in the world and is still getting used to playing on the tour.

Federer’s heavily favored to win this match and Struff will be looking to at least win a set against Federer in this meeting. He should consider himself lucky if he accomplishes that using a tiebreak to do so.

Federer knows how to keep his focus in general, but especially in his matches against big servers, so expect to see the Swiss advancing with a victory in straight sets.