Feliciano Lopez Wins In London His First Trophy Of 2017 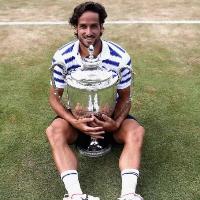 Spaniard Feliciano Lopez, ranked 32nd in the world, saved a match point and held on to defeat Croatian Marin Cilic, in the final of the Queen’s Club Championships 4-6, 7-6 and 7-6 to win his sixth ATP tournament.

The 35-year-old Lopez, who in 2014 lost the final of this tournament against Bulgarian Gregor Dimitrov, defeated Cilic in two hours and 31 minutes to win this tournament for the first time in his career.

To reach the final Lopez defeated Stan Wawrinka in the first round, Frenchman Jeremy Chardy in the round of 16, Czech Tomas Berdych in the quarterfinals and Dimitrov in the semifinals to avenge his previous loss to the Bulgarian.

Meanwhile Cilic started the tournament facing Americans all the way to the quarterfinals. He defeted John Isner in the first round, American Stefan Kozlov in the round of 16, and Donald Young in the quarterfinals; Then he beat Luxembourg’s Gilles Muller in the semifinals by a score of 6-3, 5-7 and 6-4.

Lopez, the player with most match wins on grass this season, won his first tournament of the year after falling to Frenchman Lucas Pouille in the Stuttgart Open final last week.

The Spaniard, who has now won three tournaments on grass during his career, is playing perhaps his best tennis of the year and will reach Wimbledon on high spirits.

The match was battle of power servers as Cilic had 22 aces while Lopez had 19. To win his first trophy of the year Lopez had to come back from a set down and save a match point during the third set’s tiebreak against a player who had just been broken once in the entire tournament.

Cilic, who won 87 percent of his serve points, let the match get away during the tiebreaks. After winning 6-4 the first with a break in the 10th game, Cilic held his serve in the second and third sets, but failed to clinch the match in the tiebreaks.

The Croatian lost both tiebreaks with a disappointing 7-2 in the second set and 10-8 in the third, when he lost despite holding a match-point opportunity as he served with an 8-7 lead.