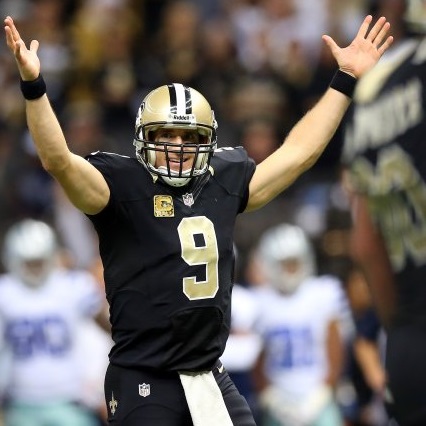 Are you kidding me here? Well, no, actually, the New Orleans Saints set an NFL record by making 40 first downs in their game against the Dallas Cowboys at the Mercedes Superdome in New Orleans on Sunday Night Football.

That’s 10 first downs a quarter! One first down for every 90 seconds of timed play!

It was ‘All-Saints Night’ down on the field as New Orleans put up 623 total yards in offense against the Cowboys, the most that the Dallas pro football franchise has ever given up in its entire history in the NFL.

It was a special evening for the new Saints Defensive Coordinator Rob Ryan owing to the fact that this same Dallas team just fired him at the end of regular season play last year. To tell the truth, Rob Ryan seems a lot happier down in New Orleans… and so does the Saints defense.

Ryan sure looked happier down on the side lines as his revamped Saints defense manhandled the Cowboys offense all evening long.  In fact they annihilated Cowboys new DC Monte Kiffin’s squad and put up over 600 yards on them.

Drew Brees was Drew Brees and threw 4 touchdown passes and finished with 392 yards in the air. Actually, Drew quit passing in the fourth quarter and kept the ball on the ground to eat up the clock and get it over with. He could have had more yardage… and perhaps even more touchdowns had he kept up the pressure. Brees  finished the contest throwing 41 passes and only missing on 7 of them.

Former Heisman Trophy winner and Saints number one draft pick Mark Ingram finally played football like he did at Alabama. We haven’t seen that so far from Mark. But he played with a vengeance on Sunday and left Saints fans hoping that this was a preview of things to come. Ingram had his first 100 yard rushing game against the Cowboys.

The Saints were coming off of an ugly, unnecessary, loss to the Jets the week before and came out of the tunnel with their teeth clinched in grim determination.  The Cowboys played badly, but it would not have made much difference.  The Saints were on a mission on Sunday.

Nevada sportsbooks had New Orleans as 6.5 point favorites before the game with the Over & Under set at 55.  The Saints scored 49 by themselves and covered by 25.5 points!