Golf Bettors on the Edge Of Their Seats As The Ryder Cup Rolls On! 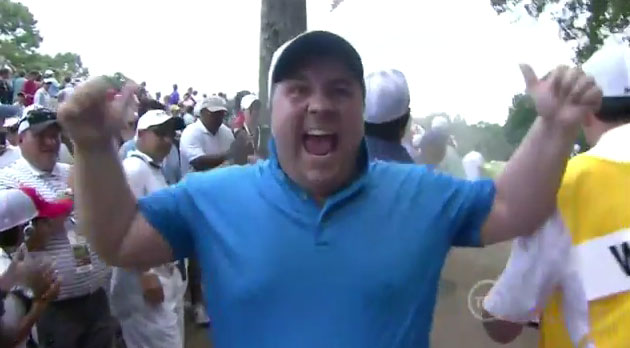 The Ryder Cup started all tied and ended all tied, but that didn’t stop us from getting some really exciting golf during the foursomes matches. The afternoon matches are underway, but we give a quick look back at what happened to get us to 2-2. Rory McIlroy and Graeme McDowell defeated Jim Furyk and Brandt Snedeker, 1-up — It was one of those matches that looked like it might not see many holes on the back nine, with McIlroy and McDowell making five birdies over their first nine holes. But the Europeans couldn’t keep the momentum going after getting 3-up with seven holes to play. Furyk and Snedeker made a late run, but an errant tee shot on the 18th by FedEx Cup champion Snedeker put the Americans behind the eight ball, and a bogey on the last allowed the Northern Ireland duo to snag a full point for Jose Maria Olazabal.

It gave us so many memorable moments, but the one thing this match showed is that the Americans have a star in Bradley and a dynamic duo in Phil and Keegan together. It was the first loss by Donald and Garcia in their history being paired together.

In Match #3 — Jason Dufner and Zach Johnson defeated Lee Westwood and Francesco Molinari, A quiet American group did exactly what it needed to do, winning four of the last eight holes to take out the salty Westwood and Molinari. Westwood always seems to find his form at this event. But the putter went cold in the early matches, and that doomed the Europeans and landed Davis Love III a team in Dufner and Johnson that we will most likely see again on Saturday.

The English grouping for the Europeans basically just hung around and let Tiger’s errant play doom the American duo, which have now lost their last three team matches together. Woods basically had nothing going all day, starting his round off with a pulled drive nearly out of bounds, and ending it with some loose shots that never allowed this U.S. team to take full aim at flags.

It’s no secret that the Americans have struggled of late at the Ryder Cup. In the Presidents Cup they seem to do fine, and even at the Omega World Cup our countrymen have been known to succeed. But there is something about the mix of Europeans and this format that has haunted the United States over the last few years.