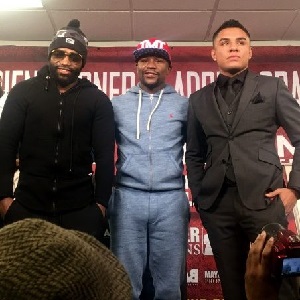 Granados understands that he is not the favorite in this fight, but in his mind having sparred with Broner in 2013, gives him better chances than what the odds reflect.

With a streak of five straight wins, three of them via the knockout, Granados thinks that the fight with Broner, a former world champion at 130, 135, 140 and 147 pounds, comes at the best moment in his career.

Granados, who wins 50 percent of his fights via KO, is looking to dominate the fight, to hurt Broner and stop him cold, becoming the first boxer to knock him out. His desire to win via a KO comes from the fact that he doesn’t want to rely on the judges as his four defeats came as a result of controversial split and majority decisions.

Granados, 27, comes from five consecutive victories including a notable TKO win against then undefeated Amir Imam in November 2015 in Quebec, Canada.

His last defeat came on May 2, 2015 in a fight against the then unbeaten Brad Salomon in a fight at the MGM’s Grand Garden Arena in Las Vegas, Nevada.

After the little activity he had in 2016, Adrien Broner is anxious to get into the ring to revive his career. Broner’s last fight came in April of last year in a fight against Ashley Theophane from the U.K. Broner won that fight with a TKO in the ninth round.

Broner, who throughout his career has won 69 percent of his fights via KO, has struggled recently to achieve that, as four of his last six victories came via the referee cards.

Broner’s last defeat came against Shawn Porter in June 2015, via unanimous decision in a fight that also took place at the MGM’s Grand Garden Arena in Las Vegas, Nevada.