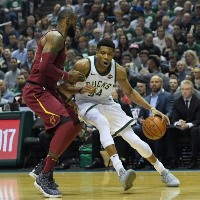 The “Greek Freak” scored 27 points and had 13 assists, while Eric Bledsoe had 26 as the Bucks held off the Cleveland Cavaliers 119-116 on Tuesday night.

LeBron James added seven assists for Cleveland, which lost for just the second time in its last 20 games. James grabbed just one rebound and three steals, while Kevin Love finished with 21 points and 10 points.

After a slow start, the Bucks scored 39 points in the second quarter. Milwaukee cracked the 100-point barrier early in the fourth but then stalled.

Milwaukee led 103-83 when Cleveland launched a furious comeback. Back-to-back three-pointers by Dwyane Wade put the Cavaliers up 107-105, capping a 24-3 run and giving the visitors their first lead since the second quarter.

A 3-pointer by Brogdon put the Bucks back in front with 3:38 remaining. A traditional three-point play by James put the Cavaliers ahead 113-112 with about two minutes left.

Tony Snell responded with a 3-pointer for Milwaukee with 58.9 seconds remaining. After a Cleveland miss, Antetokounmpo grabbed a loose ball, hit a short shot and was fouled. His free throw gave the Bucks a 117-113 lead with 5.9 seconds to go.

Wade finished with 14 points for Cleveland, and Jeff Green had 13.

Milwaukee took its first lead early in the second quarter at 41-40 with Love and James on the bench. The Bucks remained hot even after the duo returned and at one point extended their advantage to 14. They led 69-58 at the half, sparked by 17 points from Middleton, who had a four-point play, as well as a 14-2 advantage in fast-break points.

Wade was 5 for 10 from the field after sitting out Sunday night’s game against Washington to rest. The Cavs scored at least 100 points for the 25th straight game.

The Bucks (16-13) moved to fifth in the Eastern Conference standings with the win, while Cleveland (23-9) remained second.