Green’s Struggles Could Cost The Warriors The Title This Season 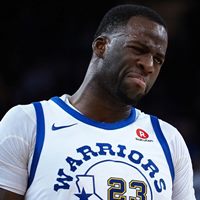 The Golden State Warriors were embarrassed at home on Christmas day by the Los Angeles Lakers 127-101 even though LeBron James got injured during the game and missed a good chunk of it.

Even though some pundits would like to see this as an early season fluke it’s hard to take it lightly. Although the result does not crown the Lakers as an NBA-Championship caliber team it’s it’s evidenced that this year the Warriors are not as solid as expected.

The Warriors have already struggled for quite some time this season and their troubles can’t simply be written off at this point.

So far it looks like Klay Thompson forgot how to shoot, the bench (one of their strengths in previous seasons) has been unbelievably weak, and their defense seems to be having problems against elite centers.

While all these are serious problems, none of them are bigger than the issues surrounding Draymond Green. The Warriors top power forward has been having a disastrous season as he’s had to deal with both his poor play on the court and his grievance with Kevin Durant. Whether the latter has resulted in the former that has yet to be determined even though both players have publicly stated that they already worked out their differences. With all these developments it seems now very unlikely that he will be able to get the maximum contract that he covets.

Green’s struggles have been so bad that he is now shooting 22.4 percent from three-point range this season. Green’s lack of long-range shot has led defenses to pack the paint or double one of the other Warrior threats, mainly Stephen Curry and Durant.

The concern stems from the fact that throughout his career Green has been a poor three-point shooter and has in fact only in one season shot over 33.7 percent from beyond the arc. His career-high mark came during the 2015-16 season when he shot 38.8 percent from three, but at this point in his career that can be looked upon as an aberration.

The key for the Warriors will be to help Green quickly fix his shot, because if they can’t find a way to solve his struggles the Warriors dynasty could come to an end.

The Warriors offense has at times become stagnant and lost quickness, which is killing their high-tempo game. So far this season Golden State has not looked like the high scoring team they were in previous championship seasons.

Although they remain an elite team the Warriors could have problems in the NBA Finals if they end up facing a team like the Toronto Raptors, who already beat them this season without having their top player, Kawhi Leonard.

Will Golden State consider trading Green if he continues to struggle or will head coach Steve Kerr try to re-configure their offense and try to make it work with the pieces he has? Regardless of which option they choose it’s clear that the Warriors are far from a lock for another NBA Championship at this point.