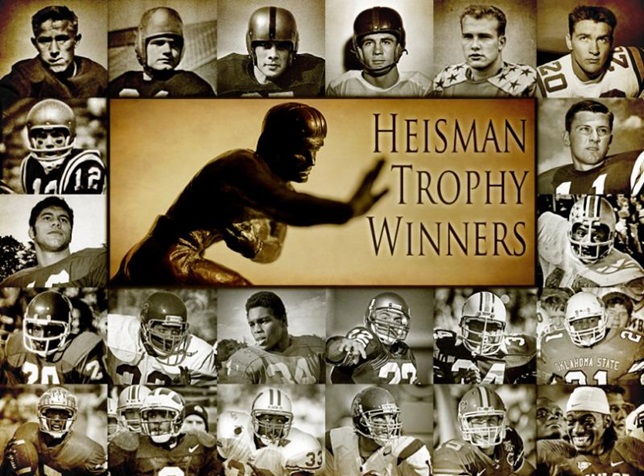 The race for the most coveted prize in college football is narrowing down and this year we have some excellent candidates to choose from.

Marcus Mariota and his Oregon Ducks had a bye week last weekend to rest up for their final run at a national championship. Sports fans all over America are eagerly anticipating a matchup between the Ducks and Nick Saban’s Alabama Crimson Tide in Pasadena on January 6th.

As it turns out, AJ McCarron and the Tide also had a week off to get ready for their upcoming battle with the LSU Tigers in Tuscaloosa. The two Tigers, LSU and Auburn are about the only hope left for stopping Alabama this season as they continue to muscle their way to a 3rd consecutive national championship.

The other two front runners for the Heisman Trophy were both very active on Saturday. Johnny Manziel had a pretty easy time of it against the University of Texas at El Paso team. After all, the Aggies did go into the game as 45.5 point favorites. Manziel only threw for 4 touchdowns and ran for 2 more.

In fact, Texas A&M put up huge numbers on the outmanned Miners. They covered and then some. Final score 57-7.  Manziel finished the day completing 16 of 24 passes for 273 yards and rushed for an additional 67 yards on 7 carries.

Famous Jameis, aka Jameis Winston, had a much more difficult time of it against the Miami Hurricanes on his home field in Tuscaloosa.  At least for the first half it was difficult.  The Seminoles dominated Miami in the second half racking up an additional 20 points while shutting out the Hurricanes.

Junior running back Devonta Freeman was also a major factor in the victory with 6 catches for 98 yards and one touchdown plus an additional 78 yards rushing with two more touchdowns.  Winston passed for 325 yards completing 21 of 29, that’s over 72%!

Like the Aggies, Florida State was also picked by the oddsmakers to win by double digit numbers, 21.5 to be exact and the ‘Noles covered easily  41-14.

The Seminoles are 13-2 at home under head coach Jimbo Fisher, who took over after the legendary Bobby Bowden. Florida State wants to be included in the national championship conversation.

Next week the going gets a little tougher when Marcus Mariota and his Ducks travel down to Stanford and Johnny Manziel and the Aggies host the Mississippi State Bulldogs. Jameis Winston and the Seminoles may well win out.