How Defense Turned The Vikings Into NFC Contenders 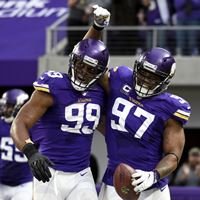 The success of the Minnesota Vikings on offense may have surprised a lot of people in 2017, but the team’s backbone has always been Mike Zimmer’s defense.

The Vikings were tremendous on all three defensive levels (defensive line, linebackers and secondary), which made it nearly impossible to score points against this defense as there were virtually no weaknesses.

The Vikings defense was an elite unit this season, it finished as a top-6 scoring defense the last three seasons, and every year has been progressively better. In 2015 it allowed 18.9 points per game, in 2016 19.2 and this season that number was down to 15.8 points per game.

This year they found a way to stop the run and at the same time bring pressure with four defensive linemen and made opposing quarterbacks uncomfortable with complex blitz schemes.

Like all successful defensive units, it all starts in the trenches, especially up the middle, where one of their anchors was defensive tackle Linval Joseph who had 31 run stops this year, was fifth in run-stop percentage and finished in the top-3 among defensive tackles this season.

Joseph is strong, powerful and has a low center of gravity which allowed him to be a force even when he had to face two blockers while trying to stop an opposing running back. He can also be a force against the passing game, which is uncommon for a nose tackle.

The Vikings run a 4-3 defense that forces a defensive end to stop both the run and pass plays. Everson Griffin fits that mold as he’s an all-around effort player that packs an incredible skill set.

Griffin has a fast get-off which allows him to beat tackles around the corner with speed, agility, and power. He can also use a spin move to elude the tackle if he gets in position before Griffin can turn the corner.

If teams manage to get past the Vikings defensive line, they have to deal with their speedy and athletic linebackers led by Anthony Barr and Eric Kendricks.

The Vikings secondary is also stacked with stud cornerback Xavier Rhodes and safety Harrison Smith. Smith was the best safety in the NFL in 2017 as he was selected to the Pro-Bowl and was included in the 2017 First All-Pro team.

Smith is a modern safety meaning that he has the versatility to go down in the box to play the run, line up in the edge to blitz, play in space to disguise coverages and be a deep safety to be used in cover 2 formations.

Smith is also an exceptional tackler as he wraps players up and takes them quickly to the ground. Whether he has to tackle in space or be physical in the box Smith is a force against the run game. He has a very high IQ and can bait quarterbacks into throwing interceptions.

Another key component of the Vikings defense is their ability to disguise their pressure formations. They can bait any quarterback and offensive linemen, regardless of their talent and experience, into allowing free rushers to penetrate the backfield and sack the quarterback.

The Vikings offense may have made the play that allowed the Vikings to advance to the NFC Championship against the Philadelphia Eagles, but their defense turned them into a Super Bowl contender all season long.