How The Cowboys Can Keep Their Playoff Hopes Alive 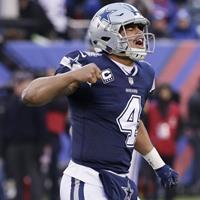 Although the Dallas Cowboys defeated the New York Giants On Sunday to earn their second consecutive victory against an NFC East rival, they are still a long way from securing a playoff ticket.

Dallas defeated the Giants 30-10 to improve to 7-6 and are in second place in their division. Although the Philadelphia Eagles already secured the NFC East title, the Cowboys can still make the postseason as a wild card.

According to the New York Times, the Cowboys have just a slim chance (6%) of making the playoffs as they would probably have to win all three of their remaining games left and hope other teams stumble along the way.

This is the combination of results that Dallas needs this week to see their odds of making the postseason improve:

Dallas fans want to see Dallas and Green Bay lose as much as possible because they own tiebreakers that can leave the Cowboys out in case they finish with the same record.

Even though the Cowboys have back-to-back wins against NFC East opponents (Washington Redskins and Giants), they didn’t get any help from other results concerning teams that are also in the race for a wild-card spot.

The next opponent for the Cowboys is the Oakland Raiders (6-7) at the Oakland Coliseum, then they travel to Seattle to play the Seahawks, who are alive in both the chase the NFC West title and a wild-card spot. They close the season traveling to Philadelphia to play the division-champion Eagles.
Dallas Cowboys Schedule: